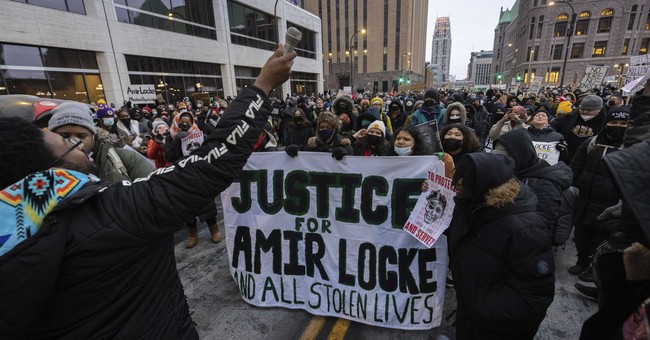 In yet another example of how public schools have become little more than on-ramps feeding woke activist movements, students at one public school in Minneapolis have been learning how to protest in the style of the radical left with tips that differ base on students' race.

According to emails obtained and reported on Twitter by Crime Watch Mpls, students in 6th and 7th grade at Justice Page Middle School received a newsletter that included tips and instructions for students who decide to observe or attend protests following the death of Amir Locke.

.
A parent sent us this copy of a newsletter received by her 6th & 7th graders at Justice Page Middle School @JPMSSTEAM in #Mpls at 50th and Nicollet Ave S.
She's concerned about the messaging to this grade level and the fact that it wasn't sent to parents.
. pic.twitter.com/iiAcX4lhv5

The "protest tips and etiquette" sent to middle schoolers stated that "many of us are—and have been—taking to the streets to protest this injustice" that Minneapolis Public Schools say exist. "When it comes to Black Lives Matter protests, if you're not Black, remember that you're there to show your support and amplify Black voices," the district explains to students. "ESPECIALLY if you're White, if they're offering the megaphone for anyone to speak, it's not for you. You are here to listen and to show support."

When it comes to other attendee behavior, the tips include "please don't post anything with people's faces/identifying information in them, especially if it's someone doing art/graffiti." I guess Minneapolis Public Schools wouldn't want people breaking laws and defacing/destroying property to be held accountable.

The guidance also implies that those engaging in actually peaceful First Amendment activity would be targeted by law enforcement: "Wear nondescript clothing," the tips continue, "Even if you aren't breaking the law, law enforcement may still try to come after you."

8/
Wear protective clothing.... not 'get out of the area if danger erupts.' ?? pic.twitter.com/o8PveFYr9v

The email notes that it is "a publication of Minneapolis Public Schools, not Justice Page Middle School," suggesting that students at other schools in the district may have also received the email. Contrary to that disclaimer, MPS has since disputed that the newsletter is theirs and instead the product of students in an after-school program. Regardless, MPS distributed the material to students and ultimately bears responsibility.

Erika Sanzi, the director of outreach for Parents Defending Education — a non-profit focused on empowering parents and exposing indoctrination —  said that "It is inappropriate for a school system to be providing protesting advice to 12-year-olds, especially when it is for particular causes and varies based on students' race," and highlighted that "It is also a problem that it was done behind the backs of parents."