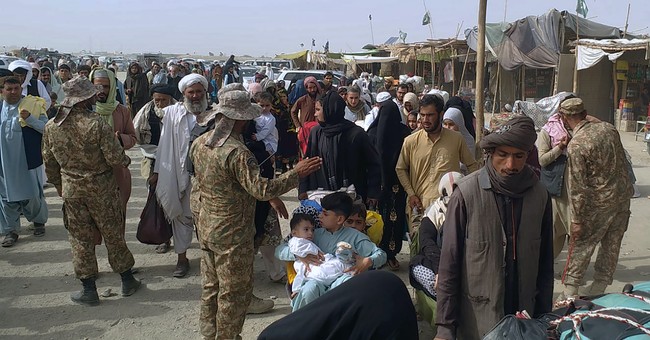 It's no secret that President Biden's handling of the United States' exit from Afghanistan after two decades of war was a disaster. Chaotic scenes unfolded in Kabul as Biden assured Americans that things were stable and a Taliban takeover was anything but inevitable. Now, a new report issued after an investigation by the United States Army provides more details about just how bad Biden botched the job.

Don't just take our word for it, even NBC News' Andrea Mitchell couldn't conceal the reality of the Army's "damning new report" that filled some 2,000 pages with information describing Biden's haphazard withdrawal that "stunned Americans and the world," first reported by The Washington Post.

As The Washington Post's report explains, "Senior White House and State Department officials failed to grasp the Taliban’s steady advance on Afghanistan’s capital and resisted efforts by U.S. military leaders to prepare the evacuation of embassy personnel and Afghan allies weeks before Kabul’s fall, placing American troops ordered to carry out the withdrawal in greater danger." The White House's lackadaisical attitude was clear in press briefings from the White House's Jen Psaki, Pentagon's John Kirby, and State Department's Ned Price. The danger created by their lack of seriousness, though, became abundantly clear when an ISIS-K suicide attacker detonated a bomb, killing 13 American service members and dozens of innocent Afghan citizens trying to flee their country.

The loss of life during Biden's failure-ridden withdrawal could have been higher, according to the Army's report that includes "previously unreported disclosures about the violence American personnel experienced, including one exchange of gunfire that left two Taliban fighters dead after they allegedly menaced a group of U.S. Marines and Afghan civilians" and another incident in which "U.S. troops killed a member of an elite Afghan strike unit that had joined the operation and wounded six others after they fired on the Americans."

As was evident at the time, the issues unfolding on the ground in Kabul and across Afghanistan were the result of poor leadership within the Biden administration and not due to the actions of U.S. military forces in the country, something WaPo's report explains at length:

Military personnel would have been “much better prepared to conduct a more orderly” evacuation, Navy Rear Adm. Peter Vasely, the top U.S. commander on the ground during the operation, told Army investigators, “if policymakers had paid attention to the indicators of what was happening on the ground.” He did not identify any administration officials by name, but said inattention to the Taliban’s determination to complete a swift and total military takeover undermined commanders’ ability to ready their forces.

Vasely “was trying to get the Ambassador to see the security threat for what it really was,” said another military official, whose name is redacted from the report. As many as 10 government-controlled districts were falling to the Taliban daily, this official noted, adding, “The embassy needed to position for withdrawal, and the Ambassador didn’t get it.”

At the embassy, U.S. troops went room to room on Aug. 15, pressing people to meet deadlines and get ready to go, an Army officer from the 10th Mountain Division told investigators. Some State Department personnel were “intoxicated and cowering in rooms,” and others were “operating like it was day-to-day operations with absolutely no sense of urgency or recognition of the situation,” the officer said.

So, much as Townhall reported during the withdrawal from Afghanistan, Biden administration officials were woefully unprepared due to willful ignorance of the reality on the ground as the Taliban stormed through province after province on the way to Kabul. The lack of early action from the Biden administration turned deadly, as worst case scenarios played out on and around the airfield at Hamid Karzai International Airport for days on end.

For its part, the White House and Biden administration officials have denied responsibility for the problems highlighted in the Army report, telling The Post that the revelations in the report are "cherry-picked" and some "are outright false and shamefully so." At the conclusion of the withdrawal — and while Americans were left behind — President Biden claimed that the "buck" stopped with him. But as more information illuminating his mistakes is released, he continues to deny reality and responsibility.