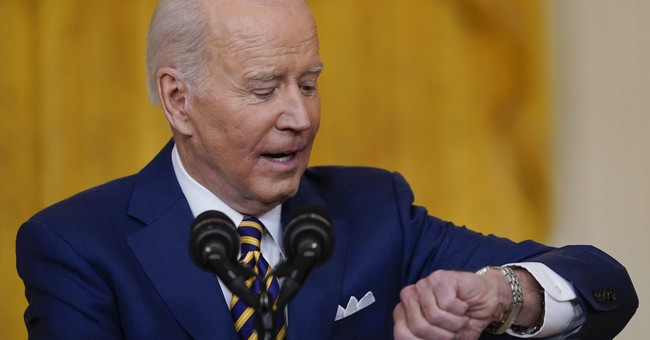 Months since Biden tried to claim credit for successfully withdrawing the United States from Afghanistan despite his exit being deadly chaos that left a still unknown number of Americans behind, Biden is allowing American tax dollars to flow back into the failed state that's now under terrorist control. The president's decision to send money to terrorists, and the programs supposedly being funded with those tax dollars, just won Biden the January 2022 Squeal Award for government waste from Senator Joni Ernst.

Among these programs supposedly being funded by taxpayer dollars — and bound to be administered based on the benevolence of terrorists — are "Activities to support environmental and natural resource protection in Afghanistan, including the preservation and protection of threatened or endangered species, responsible and transparent management of natural resources, and the remediation of pollution or other environmental damage."

Among a 2009 list of endangered species allegedly to be protected by American tax dollars are some plants, a salamander, and one insect.

The Taliban may be monsters — a government fact sheet on the funding scheme notes that "The Taliban and Haqqani Network are designated as Specially Designated Global Terrorists...  and the Haqqani Network is also designated as a Foreign Terrorist Organization" — but even they care about pollution and protecting endangered species and will allow American funds to be used as intended. Or so the Biden administration seems to believe.

Officially, the Biden administration's stance is that taxpayer dollars are not going to fall into the hands of the Taliban or other terrorist groups, but no honest person can look at the stranglehold terrorists have over Afghanistan and say money will flow under their noses untouched.

As Sen. Ernst's announcement of her latest Squeal Award notes, "The Biden administration explicitly allows the Taliban and Haqqani network to collect 'payment of taxes, fees, or import duties, or the purchase or receipt of permits, licenses, or public utility services' on these U.S. taxpayer dollars, for example."

Ernst goes on to point out that the Taliban can't be trusted "to protect the people of Afghanistan, much less salamanders or insects" and Biden is foolhardy to think "they won't steal U.S. tax dollars" intended to help the Afghan people:

The Taliban has already been caught blocking food and emergency assistance from being delivered to those in need. Within the six months since these terrorist organizations seized control of Afghanistan, women have been beaten with whips and sticks and all but made hostages within their own homes under the Taliban’s draconian rule. Afghanistan now tops the list as the most dangerous country in the world for Christians.

Folks, we can never trust the Taliban to protect the people of Afghanistan, much less salamanders or insects—and we certainly can’t trust that they won’t steal U.S. tax dollars intended for humanitarian assistance without adequate safeguards.

The Biden administration needs to stand by its promise to maintain financial sanctions against the Taliban unless they change their governing policies, deny safe harbor to terrorists, and guarantee the fundamental human rights of Afghan women and girls. Clearly, they have not met any of those conditions.

For these reasons, I am giving my January 2022 Squeal Award to the Biden administration whose carelessness is once again putting taxpayers dollars within the grasp of terrorists in Afghanistan.

"There is no question the people of Afghanistan are suffering terribly from widespread famine and human rights abuses and desperately need help," continues Sen. Ernst's announcement. "But the Biden administration has not put protections in place to prevent this new U.S. assistance from ending up in the hands of terrorists, just like when billions of dollars of weapons and supplies were handed over to the Taliban following Biden’s poorly planned and mishandled withdrawal."

In Joe Biden's world, the Taliban are bad, but not so bad that they'd intercept taxpayer dollars bound to stop pollution and save an endangered salamander. It's unsurprising given the Biden administration's admitted reliance on the Taliban during the deadly and disastrous withdrawal from Afghanistan, but it's insane nonetheless.