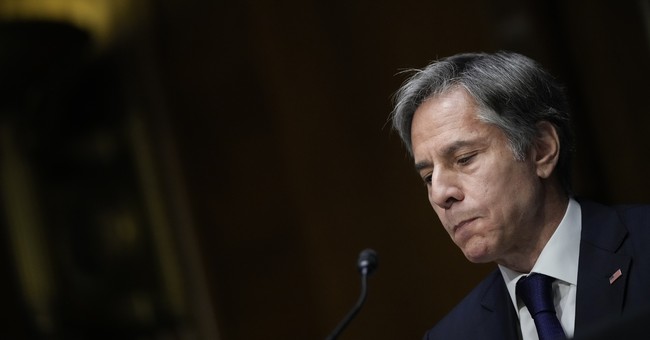 Secretary of State Antony Blinken jumped in on the White House's damage control effort Thursday morning after Biden suggested in his Wednesday press conference that the United States might tolerate a "minor incursion" of Ukraine by Russian troops. It was a horrible choice of words that sent a dangerous message to Russia. And as with anything the president says, it also sent a message to other foes such as China which would likely enjoy the same permission for an unpunished minor incursion into Taiwan.

So Blinken decided to address the situation in a speech in Berlin, Germany, in an attempt to reinforce the United State's already weakened position. Calling the situation a "moment of great urgency," Biden's Secretary of State said the administration still believes "we can resolve things peacefully and diplomatically" and has "repeatedly reached out to Russia with offers of diplomacy."

Among the issues on which the United States has engaged with Russia seeking goodwill and common ground, according to Blinken, are "common action to address the climate crisis" and the Biden administration's quixotic campaign to revive the disastrous Iran Nuclear Deal. So, good news Ukrainians — Joe Biden is coming to your rescue by asking Putin to go green and help enable the world's worst state-sponsor of terror develop nuclear capabilities.

These offers, Blinked said, were "rebuffed" by Putin. Likely because as a totalitarian bully, Putin doesn't much care about playing nice with the Biden administration or what else happens as long as he hangs on to power. And why should Putin? Biden already green-lit the NordStream2 pipeline project — giving Putin more power in the region and literally the opposite of the climate action Biden has forced on Americans.

Confusingly, Blinken said that despite Russia's actions — including the amassing of troops, weapons, and military vehicles on its border with Ukraine — "this crisis is not primarily about weapons or military bases." Huh? Blinken made the situation out to be some sort of philosophical movement undertaken by Russia to reject the peace and freedom of post-Cold War Europe. Of course, that's the effect of Putin's bullying of European neighbors — but he's acting as a power-hungry dictator and not some intellectual.

So far, Blinken's diplomacy in the region on behalf of the Biden administration hasn't dissuaded Putin's troops. Russia continues to threaten Ukraine from its doorstep while engaging in espionage, cyber offensives, and other attempts to undermine Ukrainian sovereignty. Nevertheless, Blinken persists and is set for more meetings in Europe in the days ahead as he attempts to look busy while so far not having any foreign policy wins for Biden back home in Washington.