Tim Scott: 'The Last Time Inflation Was This High, I Had an Afro' 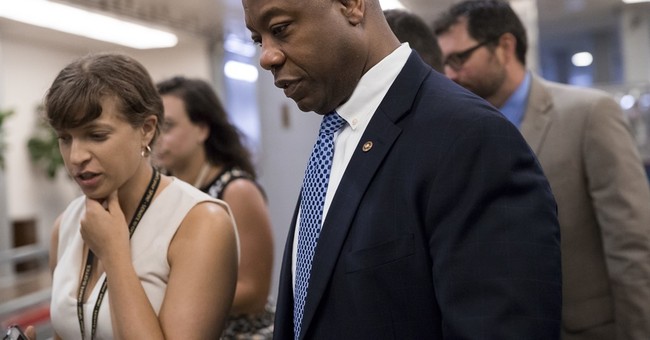 There's no doubt, says Senator Tim Scott (R-SC), that inflation is a "bone-crushing, life-changing, hope-stealing, job-killing" force being felt by the American people, despite the Biden administration's attempt to belittle the economic woes facing Americans. "This is unprecedented — the last time inflation was this high I had an afro — that is a long time ago, that is early 1980s," he added in an interview on Fox News Wednesday morning.

Setting the record straight on what inflation means to American families, Senator Scott highlighted how President Biden's "Build Back Better" budget will only do more damage amid the record-breaking inflation that, until quite recently, was called "transitory" by the White House.

"The truth is that we have to find a way to forge forward by reducing spending from the federal government," Senator Scott pointed out, in order to allow the private sector to rebound. "We have to pull back on this Build Back Broke-r plan that the Democrats are still trying to weave together," he added as Senate Majority Leader Chuck Schumer (D-NY) promises that President Biden's budget will be passed before the Senate leaves for Christmas.

"The last time inflation was this high, I had an afro," says @SenatorTimScott. "We have to find a way to forge forward by reducing spending from the federal government... Let's have a Christmas surprise and not pass the BBB." pic.twitter.com/ANYf58hZZC

In the real world, though, as Senator Scott explains, Biden's budget "is not good for the American family, it is not good for single moms working paycheck to paycheck, this is frankly not good for rural America where you have one grocery store, or one gas station, and you simply can't keep it all together."

As Schumer's promise to get Build Back Better passed and to President Biden's desk before Senators leave town looks exceedingly unlikely, Senator Scott issued a call to "have a Christmas surprise and not pass the BBB."

Senator Scott took an optimistic tone when discussing main Democrat hold-out Senator Joe Manchin (D-WV), saying "every sign that we've seen from Joe Manchin is he's concerned about two things: One is inflation because he understands that the average person in South Carolina or West Virginia cannot take any more — median income in this country is around $35,000 a year," he noted.

"When you think about what this inflationary impact is on folks living paycheck to paycheck, it means that you have to choose between sometimes your healthcare, sometimes your energy, and sometimes the utilities in your house. Those are too hard of choices to force on Americans simply because you poured too much fuel on the fire and inflation explodes," Senator Scott said of Biden's economic policies.

"We can change that by stopping spending money in Washington [to] allow the American people to catch up," Senator Scott said. "That means putting more focus on an incentive-based economy where we let the private sector do what they do really well and getting the government out of the way. Those are two simple facts that could change the outcome in 2022," Senator Scott added.