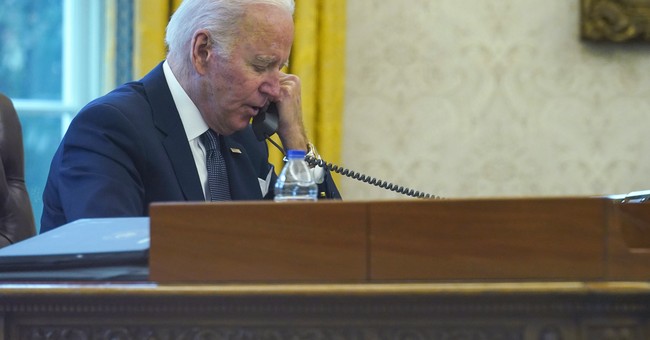 The Democrat-Media complex has been in overdrive trying to protect what remains of President Biden's credibility and, thanks to collusion between the White House and the fact-checkers at PolitiFact, Townhall found itself in the crosshairs of a White House-triggered fact-check.

On Wednesday as President Biden spoke in Kansas City, Missouri, Townhall clipped and tweeted a portion of his remarks:

BIDEN: "We're making progress. We're going to keep at it to ensure the American people are paying their fair share for gas." pic.twitter.com/f41bFtbeEP

After the clip picked up steam on Twitter and was covered by our friends at Twitchy, Mike Gwin — the White House's rapid response director — lashed out and baselessly accused Townhall of "lazy, deceptive, editing" that Gwin claims was done "to omit that the President was noting falling gas prices." Except of course, that isn't what happened.

In the clip Townhall tweeted, President Biden says "Nationally, prices are down seven cents a gallon," meaning Gwin's claim that the video was edited to omit the president noting falling gas prices is entirely false.

But after the Biden lackey made his false claim, PolitiFact conveniently decided to fact-check Townhall's video, asking our team for an explanation and citing the White House as the source of their scrutiny.

Townhall responded to PolitiFact via email:

Townhall was directly quoting the president in our tweet. In the clip, Biden is heard saying, "Nationally, prices are down seven cents a gallon, continuing to fall. We're making progress. We're going to keep at it to ensure the American people are paying their fair share for gas."

We have added an extended clip on Twitter, which includes Biden going on to say "not being gouged for gas." This does not change what Biden said in our original clip.

Subsequently, PolitiFact published a "story" on Townhall's video that would impress any crisis public relations firm with its scrambling to clarify what Biden *meant* with his words:

The full context of Biden’s Dec. 8 remarks indicates that he was talking about working to lower the price of gas to a more reasonable amount for Americans, not raise or maintain it. The line was met with applause from the crowd at the Kansas City Area Transportation Authority.

Nowhere does PolitiFact dispute what Biden said, because they can't — it's on video — nor did they find any editing by Townhall that changed what Biden said. But that didn't stop them from doing additional damage control for President Biden, claiming that Townhall's "follow-up tweet wrongly claimed that omitting Biden’s final words did not change the meaning of his sentence."

What PolitiFact really means is that they have a subjective opinion on what Biden's statement meant — one that conveniently aligns with the White House — from where PolitiFact apparently takes its orders. They don't even try to hide their collusion, as seen in this tweet where a PolitiFact "reporter" shared Gwin's video showing the supposed "full context" before Townhall had even been notified a fact check was incoming.

PolitiFact claims to be committed to "nonpartisan" and "independent fact-checking," listing its "core principles" as "independence, transparency, fairness, thorough reporting and clear writing." But, yet again, as Townhall witnessed in real-time this week, they're not actually nonpartisan or independent. They took their cues from the White House to clean up the mess President Biden's stumbling verbiage created. Without being nonpartisan or independent, it's impossible for PolitiFact to be fair. And as for thoroughness, they ignored Biden's own words and the questions they raised in order to land a hit on conservative media at the behest of the White House.

A few questions PolitiFact should have addressed if their fact check of Townhall's clip was to be nonpartisan, fair, or thorough:

Was "fair share" the actual text on the teleprompter as he was giving the speech?

Why is the White House so sensitive about the words "fair share"?

Why isn't Mike Gwin being fact-checked for omitting context on Townhall's tweet in order to falsely claim we misled viewers? Neither Gwin nor PolitiFact mention the first few seconds of our clip where Biden notes falling gas prices.

PolitiFact would also be wise to fact check President Biden and the White House's statements that are barely complete coherent thoughts in the first place. Did PolitiFact ask the White House to explain why Biden keeps claiming inflation is "transitory"? How about Biden's promise that Americans wouldn't be left behind by his Afghan airlift?

The only reason the fact-check happened was because the White House wanted to cover for President Biden's inability to avoid being a gaffe machine. If Biden had said he wanted to "ensure people are paying a fair price for gas" or something else that makes sense and isn't either a gaffe or absurd, the White House wouldn't have gotten triggered and PolitiFact wouldn't have cared. But the hurried attempt to quash Townhall's unedited video of Biden's remarks betrays the White House's awareness that Biden is a mess. Rather than curbing their gaffe machine of a boss, the White House is making PolitiFact clean up for Biden.

At the same time PolitiFact was preparing its hit, the crew at Lead Stories fact-checked a story published by Townhall's sister site, Twitchy, that included the video in question — another prong in the fact-checkers' strategy to do damage control for President Biden.