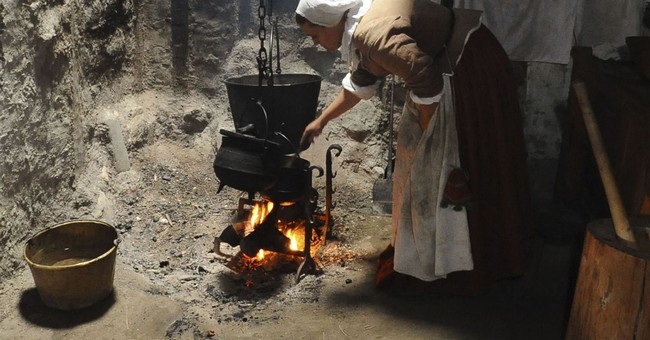 Joining this year's growing chorus of woke warnings about what and how Americans are allowed to celebrate the holidays, the District of Columbia Public Schools (DCPS) chancellor advised families they should "decolonize" the Thanksgiving holiday.

In a message titled "Sharing My Gratitude" posted to the DCPS website this week, Chancellor Lewis Ferebee outlined the steps parents ought to take to ensure a sensitive and woke Thanksgiving weekend.

In addition to pushing vaccination against the Wuhan coronavirus and encouraging "limiting our travel" to "keep our community safe," Ferebee then turns to "recognizing the history of the holiday." And no, he's not talking about it in a positive light.

"Thanksgiving is a day that can be difficult for many to celebrate as we reflect on the history of the holiday and the horrors inflicted on our indigenous populations," Ferebee writes. But don't fret, DC parents, you don't have to navigate the apparently horrific holiday on your own. It turns out the DCPS "Equity team" put together some resources for families to use to "consider decolonizing your Thanksgiving." Sounds... not fun.

The first tip from Chancellor Ferebee is for those hosting a Thanksgiving meal or gathering: "consider doing a land acknowledgment," he suggests with a link to a guide on how to do such a ceremony. The guide includes commentary from woke university faculty who claim "colonialism is a current ongoing process" and so "we need to build our mindfulness of our present participation" in such alleged colonialism. Parents should "use terms like genocide, ethnic cleansing, stolen land, and forced removal" when making a land acknowledgment with their children. Confusingly, the guide then adds that talking about genocide and ethnic cleansing "shouldn't be grim" but "we need to share in Indigenous peoples' discomfort."

Ferebee also shared two articles with more commentary on Thanksgiving's apparent evil and how parents can decolonize with their kids. One alleges the Thanksgiving celebrations most Americans remember from their childhood "internalizes oppression." Another refers to Thanksgiving as a day of "mourning."

After instructing DC's parents to walk their children though the left's version of Thanksgiving in which they ought to talk about genocide, mourn, and feel discomforted, Chancellor Ferebee wishes readers a "joyful start to the holiday season" and a "happy Thanksgiving."

Chancellor Ferebee is hardly alone in his attempt to make Thanksgiving into a woke self-flagellation exercise and have parents continue the leftist indoctrination their kids are already subject to in school and from the mainstream media. "Instead of bringing stuffing and biscuits, those settlers brought genocide and violence," claimed MSNBC guest Gyasi Ross this week. "That genocide and violence is still on the menu," he added.

Recommended
Buttigieg on Criticism Over Comments About Racist Roads: ‘the Point Is Not to Make America Feel Guilty’
Landon Mion

It's seemingly the case that leftist virtue signaling and performative wokeness have combined into a maelstrom of absurdity this Thanksgiving, in which nodding in agreement with every nonsensical claim is expected, whether there's any underlying truth (there usually isn't). Genocide in America today? Really?

And as for the "violence" that's "still on the menu," perhaps MSNBC and the rest of the wokesters should be looking at the spiking — and, in case it needs to be said, non-colonial — violence in American cities and who's to blame for the disastrous policies that give rise to increases in brazen thefts and violent crimes.

Share this on Facebook
Tweet
Buttigieg on Criticism Over Comments About Racist Roads: ‘the Point Is Not to Make America Feel Guilty’
Landon Mion
Fauci Says 'We're Going to Have to Start Living with COVID' Because It Won't Be Eradicated
Landon Mion
Fauci Fear Mongers on XI Variant and Warns Lockdowns Could Be Coming
Katie Pavlich
Joe Biden Caught Maskless Indoors, Yet Again
Rebecca Downs
South African Doctor Who Raised Alarm About Omicron Variant: 'Symptoms Were So Different And So Mild'
Rebecca Downs
Just Released CDC Data Shows Abortions Have Increased Thanks to a Particularly Dangerous Method
Rebecca Downs
CARTOONS | Bob Gorrell
View Cartoon
Most Popular