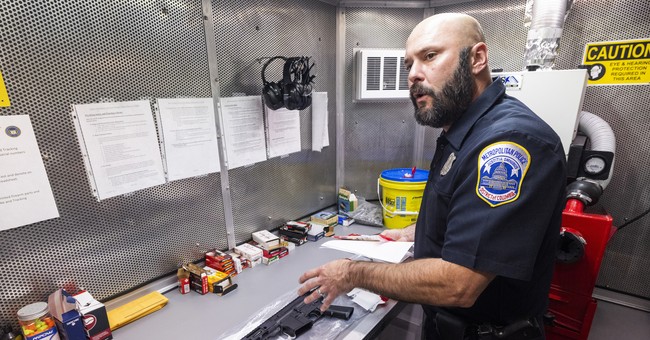 The shooting death of a yet-unidentified man at a gas station parking lot late Monday night in Washington, D.C. marked the city's 200th homicide of 2021, a grim milestone and one that's higher than any year since 2003.

The spike in homicides for the district is, so far this year, 12 percent higher than last year and up from 166 in 2019. The two-decade low for annual homicides was in 2012, when 88 were recorded per police data.

The nation's capital, long run by Democrats who seems to spend as much time talking about their quixotic pursuit of statehood as they do addressing violent crime, is in need of more law enforcement officers and resources, not less despite calls from woke Democrats — as are large cities elsewhere in America.

It's not only DC that has seen a homicide increase:
"Homicides rose in 29 major U.S. cities through September compared with the same period last year, according to the Council on Criminal Justice, a Washington-based institute."

The D.C. Police Union issued a letter highlighting the spike in crime from 2019 to 2021 and called on city leaders to do more to support the city's police department and protect Washingtonians.

"Some neighborhoods are suffering greatly from this violence," states the letter before outlining the even larger spikes in certain portions of the district. "In Ward 4, for example, homicides have increased 89% this year. Armed robberies in Ward 2 are up 188% and in Ward 6 up 72%. Year to date, there have been over 360 carjackings in D.C. Well more than one per day."

The police union says that there are multiple causes for the increase in crime, but singled out the D.C. Council for it's "reactionary" embrace of the radical defund the police movement's demands and "the consequences of which were not properly considered." The D.C. Council’s "continued desire to reduce the size and funding of the police department hangs like a dark cloud of our city," the police union said before warning that "other major cities that have made similar imprudent efforts have also experienced mass exits of police officers and dramatic increases in crime rates."

"Police officers are hamstrung," explained the union's letter, "if not altogether unable to do the impactful and necessary tasks needed to confiscate illegal weapons, apprehend violent criminals and protect communities."

Since the D.C. Council began going after the city's police force in the summer of 2020, 417 officers have left their posts. The union also noted that 54 percent of those who left the force resigned — rather than retired — meaning more than half of those who stepped away from law enforcement just "turned in their badge and walked away."

The D.C. Police Union's letter closes with a warning: "D.C. officials should take note of recent election results across the country, a clear sign of public sentiment, instead of being misguided by activists on social media."

For her part, Washington Mayor Muriel Bowser told her city's residents last week that their "safety is my number one priority" and claimed her administration is "throwing every resource at the rise in violent crime in D.C., and we will keep pushing on all fronts until we see positive results.”