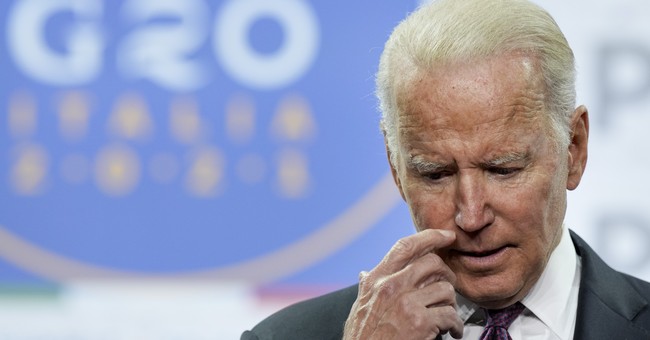 President Biden and other world leaders are gathered in Glasgow, Scotland this week for a United Nations summit on climate change. It's basically a self-flagellation ceremony for the leaders of the world to traverse from their respective countries around the globe in order to talk about how evil carbon emissions are and what they're going to do to supposedly save the world.

From what can be seen at the climate change confab, though, these world leaders shouldn't be lecturing citizens of the world about how they can adjust their habits to save the planet.

For one, there's the SUVs and other vehicles that make up dignitaries' gas-guzzling motorcades. We're talking about a lot of cars, the likes of which Democrats and leftist climate radicals say are problematic and need to be replaced by bicycles or electric-only vehicles.

There are so many vehicles for the dozens of world leaders assembled that the motorcades are piled up along the streets of Glasgow. And because they have to be ready to roll out at any moment, apparently, many have their engines idling... something else climate activists say commoners aren't supposed to do.

Side streets around #COP26 are choked up with chauffeur-driven cars and vans, many with their engines idling. Interesting look for a climate conference. pic.twitter.com/9NO83ydN0w

Other special infrastructure brought in to facilitate the meeting includes large supplementary lights that run off of diesel generators — even during the day when lights aren't needed — according to people on the ground in Scotland.

Personally I enjoyed the temporary lights in Kelvingrove Park running off diesel generators and on in daylight at 2:30 yesterday afternoon. pic.twitter.com/H95oq2id6X

Despite all their climate-unfriendly actions, there is still plenty of virtue signaling to go around, such as turning off the hot water for attendees. Because amid a global pandemic, nothing says care like preventing world leaders from using hot water to wash up.

And then of course there's the matter of how all these world leaders made it to Glasgow. Unlike young climate fanatic Greta Thunberg who often takes a boat around the world, elite world leaders flew their jet fuel-guzzling and CO2 spewing planes to Europe.

Dozens of world leaders face allegations of hypocrisy for taking private jets to Glasgow, while telling the world to cut their carbon footprint. @NickFerrariLBC asks: are these criticisms fair? pic.twitter.com/9n2OLu9bNv

According to a TV network in India, some 400 private jets landed in Scotland for the climate summit and in the process produced roughly 13,000 tons of CO2. Meanwhile Democrats back home suggest American farmers kill off their cows to reduce methane and shame large families for being insensitive to the needs of the Earth.

#Gravitas | World leaders have assembled in #Glasgow for #COP26. 400 private jets have landed, producing 13,000 tonnes of CO2. Is this climate action or climate hypocrisy? Here's what @palkisu has to say@COP26 #COP26Glasgow #ClimateChange pic.twitter.com/Wr50FJQV7X

How can those supposedly committed to slashing their citizens' emissions in order to save the planet justify such hypocrisy?

Well, the UK's Foreign Secretary Liz Truss defended the hundreds of private jets being flown in the name of climate protection by saying world leaders simply "need to meet in-person" and a Zoom call just wouldn't cut it. Right.

"It's really important that we do have people face to face"

An estimated 400 privates planes have been flown into Glasgow ahead of the COP26 climate summit.

Senator John Barrasso (R-WY) wrote to several of Biden's cabinet secretaries whose agencies are part of the American delegation in Glasgow this week to get a full accounting of the carbon footprint of their travel.

Barrasso's request for information comes after Senator Joni Ernst (R-IA) introduced the Executive Branch Emissions Transparency Act in March with Sens. Tom Cotton (R-AR), Shelley Moore Capito (R-WV), and Rick Scott (R-FL). Their bill is aimed at "exposing the hypocrisy of government officials who are targeting fossil fuels while themselves relying on fossil fuel-powered transportation, like President Biden’s “Climate Czar” John Kerry" who continues to jet around the world in the name of fighting climate change.