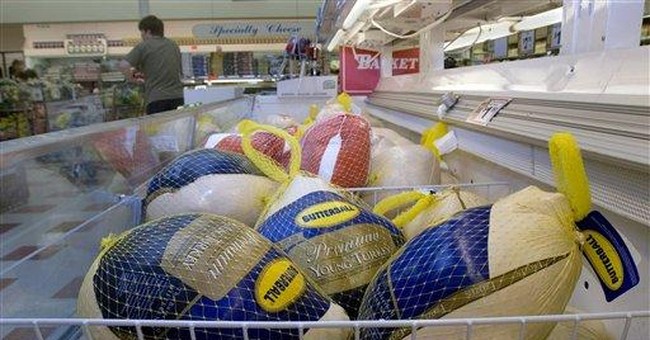 The double-whammy of President Biden's inflation and supply chain crises that are continually brushed off by him and his administration are about to land another significant hit on American consumers after months of pain at the pump, in the grocery store, and when paying rent and utility bills. Ahead of Thanksgiving, literally everyone — even mainstream liberal media outlets — is ringing the alarm.

The New York Times published a story Monday explaining how nearly every aspect of Americans' Turkey Day feasts will be more expensive this year from spices and ingredients to the aluminum pan that holds the bird and fixings. It's not just a few extra cents here and there, it's everything. And, as The New York Times concludes, "Thanksgiving 2021 could be the most expensive meal in the history of the holiday."

Ny times”Thanksgiving 2021 is shaping up to be the most expensive meal in the history of the holiday. Nearly every ingredient, from the turkey to the after-dinner coffee, is expected to cost more than ever.”

Whether The Times is counting that as 400 years since the first Thanksgiving or 80 years since the fourth Thursday in November was made a national holiday, it's still a new milestone of shame to mark the passing of the first year of the Biden administration.

Even though The New York Times erroneously concludes that "There is no single culprit" for the record-high cost of this year's Thanksgiving, The Times does highlight the effects of Biden's mismanagement of inflation and the country's transportation infrastructure.

"The nation’s food supply has been battered by a knotted supply chain, high transportation expenses, labor shortages, trade policies and bad weather," The Times writes of Biden's many bungled responses. "Inflation is at play, too. In September, the Consumer Price Index for food was up 4.6 percent from a year ago. Prices for meat, poultry, fish and eggs soared 10.5 percent."

On Tuesday, the Morning Joe crew on MSNBC reacted with surprised gasps when Mika read The New York Times' report.

"No, you wouldn't believe it," Mika said. "Almost every ingredient in a traditional American Thanksgiving, from the disposable aluminum roasting pan to the pumpkin pie, will cost more."

Even the star of Thanksgiving dinner, the turkey, is setting price records. As Mika noted, the "price per pound is expected to rise above $1.36, surpassing the record benchmark price set back in 2015."

MSNBC: this year’s Thanksgiving will be “the most expensive meal in the history of the holiday.” pic.twitter.com/Zj1LpE8Kfo

"You know the grocery store right now, I mean everything is up. It is... I was going shopping for my daughter and I was like, okay this is different than even a few months ago, the prices on everything," Mika added of rising costs. If even she, someone with a net worth estimated around $20 million, is noticing the rising price of goods, the reality faced by everyday Americans is clearly dire.

What remains to be seen is whether the Biden White House will attempt to highlight some cooked-books version of Thanksgiving's cost as the administration did with this now-infamous tweet ahead of Independence Day:

Planning a cookout this year? Ketchup on the news. According to the Farm Bureau, the cost of a 4th of July BBQ is down from last year. It’s a fact you must-hear(d). Hot dog, the Biden economic plan is working. And that’s something we can all relish. pic.twitter.com/7h9qLauIbC