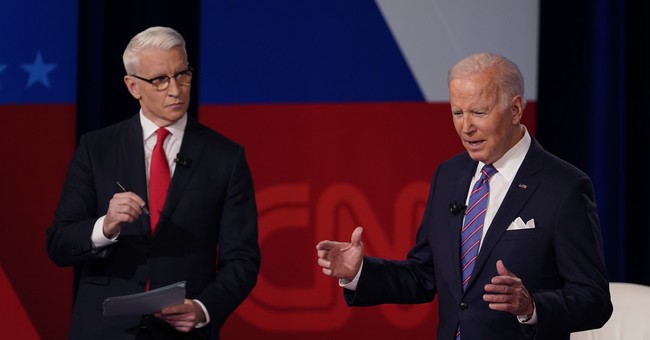 On Thursday night amid multiple crises of his administration's creation, President Joe Biden joined CNN for a town hall event hosted by Anderson Cooper and it went about as well as you could expect for a septuagenarian up past his bed time.

The morning after Biden and Cooper's conversation, though, CNN itself published a fact check of what Biden claimed on the stage in Baltimore.

When asked about the U.S.-Mexico border — at which an unmitigated illegal immigration crisis is raging — the president said "I've been there before, and I haven't, I mean, I know it well. I guess I should go down... now, my wife, Jill, has been down. She's been on both sides of the river. She's seen the circumstances there."

CNN's fact check points out that "CNN could not immediately find any evidence that Biden has previously visited the southern border, and the White House has not specified when this visit supposedly occurred," adding "Jill Biden's last visit to the border was in December 2019, during the presidential campaign, not as first lady."

As most Americans have already concluded — based on Biden's statements and the White House's inability to provide the details of some past visit to the border — Joe Biden hasn't been to the border.

On the issue of taxes, Biden claimed "the highest tax rate is 35 percent" under the current tax code, but he's mistaken. As CNN explains, the highest tax rate is actually 37 percent, meaning Biden wasn't able to accurately state the top tax rate in the country as he plans to significantly increase the tax burden on those he determines aren't paying their "fair share."

At the CNN town hall, Biden also couldn't resist repeating the false statement about Fox News and its parent Fox Corp. that "they mandate vaccinations." Probably reluctantly, CNN points out that this is false, explaining "Fox Corp. does not actually require that employees get vaccinated," and allows those who choose not to get a vaccine to instead get tested.

Even a point on which Biden technically got the facts right — saying he created "more jobs in the first eight months"of his administration "than any president in American history" — CNN busted his bubble:

This is true, but the circumstances of Biden's first eight months are so different from the circumstances that greeted every other newly elected modern president that meaningful direct comparison is effectively impossible. Biden took office less than a year after the economy shed more than 22 million jobs in two months because of the pandemic. Even with the jobs rebound that began in May 2020, the US still has about 5 million fewer jobs than it did before the pandemic hit. In other words, Biden-era gains -- an average of more than 600,000 jobs added per month from February through September -- are still filling the giant pandemic hole.

CNN's fact checkers weren't the only ones busy as President Biden spun yarns and misstated his way through the town hall, even White House officials were busy trying to explain what Biden "meant to say."

On the critical issue of Taiwan — as China continues escalating its aggression toward the island nation — Biden told Anderson Cooper that "we have a commitment" to come to the defense of Taiwan if China attacks. But the White House again had to clarify that "The President was not announcing any change in our policy and there is no change in our policy."

Fine, but this isn’t the first time the WH has had to walk back Biden’s comments committing the US to Taiwan’s defense. https://t.co/dUggwT9U1J

It’s two things:
1) Is this how he personally feels about Taiwan?
2) He keeps “misspeaking” about a serious issue. Twice he’s made this gaffe + once said there was a U.S.-China Taiwan deal.

The Associated Press also jumped in on the Biden debunking, pointing out that the president's statements about his handling of the Wuhan coronavirus pandemic were anything but accurate. Here's what Biden said at the CNN town hall:

When I first was elected, there were only 2 million people who had COVID shots in the United States of America — and the vaccine. Now we got 190 million, because I went out and bought everything I could do and buy in sight and it worked.

"No, that’s not how the vaccine rollout in the U.S. happened. Biden is overstating his part," explained AP:

First, it’s not true that 2 million people had shots when he was elected in November. The COVID-19 vaccines were still awaiting emergency authorization then. The first shots were administered to the public in mid-December.

Nearly 16 million doses had been administered by Jan. 20, the day Biden took office. And Biden didn’t buy up all the doses — the Trump administration had purchased 300 million doses of COVID-19 vaccines from Pfizer and Moderna in December, weeks before Biden was inaugurated.

Trump's plan, The Associated Press concludes, "set the stage for an acceleration of vaccinations that did not happen solely because Biden 'went out and bought everything I could do.'"