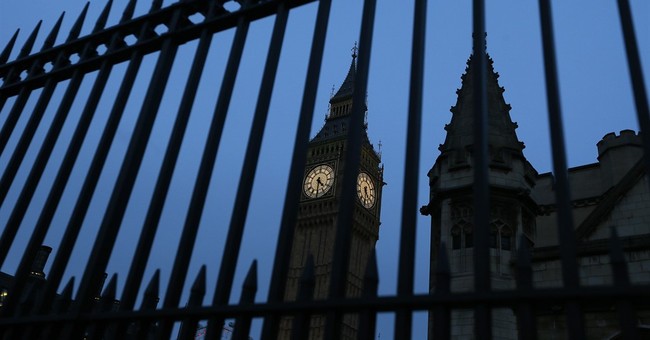 David Amess, a conservative member of British parliament, was stabbed to death while meeting with constituents on Friday and now authorities have released more information about the assailant while categorizing the slaying as a "terrorist incident."

According to reporting from the Associated Press, British officials with the Metropolitan Police "described the attack as terrorism and said the early investigation 'has revealed a potential motivation linked to Islamist extremism.'"

A statement added: "The early investigation has revealed a potential motivation linked to Islamist extremism" https://t.co/aQanny3cjE

The BBC reported that "A 25-year-old British man was arrested at the scene on suspicion of murder, and police said they were not seeking anyone else over the death" while "officers are currently carrying out searches at two addresses in the London area."

Authorities believe the man "acted alone but inquiries into the circumstances of the incident are continuing. Government sources have told the BBC the man is a British national who, from initial inquiries, appears to be of Somali heritage," they added.

Tributes to David Amess poured in from figures in Britain and around the world after the news of the deadly attack broke:

Our prayers are with the family and loved ones of Sir David Amess after this unspeakable tragedy.

Shocking to hear of the death of Sir David Amess. My sincere condolences to his friends, family & colleagues.

Imagine simply meeting constituents & not going home.
That’s why elected representatives subject to threats & intimidation have to take them seriously.#auspol

Absolutely devastating news about Sir David Amess. He was hugely kind and good. An enormous animal lover and a true gent. This is so completely unjust. Thoughts are with his wife and their children.

Having served in parliament since 1997, Sir David Amess' last tweet was an announcement of the event at which he would be attacked:

To book an appointment please email amessd@parliament.uk or call 020 7219 3452 pic.twitter.com/aHhxWPrXXi

The AP report noted that the attack "renewed concern about the risks politicians run as they go about their work representing voters" as "British politicians generally are not given police protection when they meet with their constituents."

This is a developing story and may be updated.