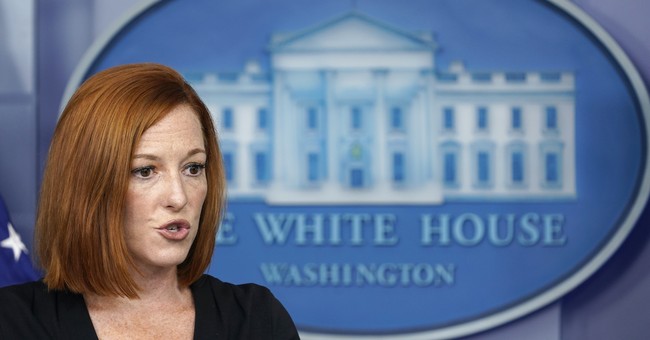 After a mess of a briefing with Homeland Security Secretary Alejandro Mayorkas saw him scurry out of the briefing room on Friday, White House press secretary Jen Psaki took some more questions from reporters which, unsurprisingly, included questions about the administration's immigration crisis. Apparently, Joe Biden and the White House are "tired" of those pointing out that the administration has failed to do anything to address the illegal immigration crisis at the southern border.

When a reporter asked Psaki if she could point to any "tangible" results or successes brought about by Vice President Kamala Harris — the Border Czar tasked with handling the border crisis — Biden's press secretary had none to enumerate.

And in her longwinded answer that failed to list any concrete answer as to what the Biden administration had done to stop the flow of illegal immigrants across the U.S.-Mexico border, Psaki instead chose to complain about... Republicans. Or anyone who has been critical of Biden's border policies.

"There are a lot of Republicans out there giving speeches about how outraged they are about the situation at the border, not many who are putting forward solutions or steps that we could take," Psaki claimed. "So, we're a little tired of the speeches, we'd like to partner on solutions and working together to address this problem that has not been partisan in the past."

.@PressSec: "There are a lot of Republicans out there giving speeches about how outraged they are about the situation at the border...we're a little tired of the speeches." pic.twitter.com/33NOZBihsC

Ah. Poor President Biden and his staff in their fortified offices are tired of people registering complaints about the tsunami of illegal immigrants pouring across the border and endangering our national security. How dare Republicans point to the overwhelmed federal and state agents and the growing number of illegal border crossers being released inside the United States — not to mention the drugs, weapons, and human trafficking victims coming with them?! Perhaps Biden and the rest of the administration need more naps.

If the White House is tired of hearing about its illegal immigration crisis, imagine how those who live along the border and elsewhere in southwestern states must feel? The White House clearly is too busy thinking about their own comfort over the Americans whose cities have been overrun with illegal immigrants and the drugs, crime, and Wuhan coronavirus they bring with them.

Psaki's claim that Republicans haven't offered solutions is also false on its face. There were four years of Republican-led immigration and border policy under President Trump, and it worked. If Psaki wants to know what the Republican plan for border security is, she's either an amnesia patient or being willfully ignorant.

The plan was pretty simple. Build more physical barriers. Keep those seeking asylum in Mexico. Don't release tens of thousands of illegal border crossers into the United States. Have consistent communication across the government that tells those who seek to come to America that they will not succeed if they do so illegally.

And her claim that immigration and border security hasn't been partisan in the past? It's absurd. The Republican answer to illegal immigration from President Trump and leaders in Congress has been called everything from xenophobic to racist to barbaric to inhumane.

Perhaps if leading the free world and being expected to maintain security at home is too tiring for Biden, Harris Mayorkas, Psaki, and the rest of their administration they shouldn't have sought out such offices in the first place.