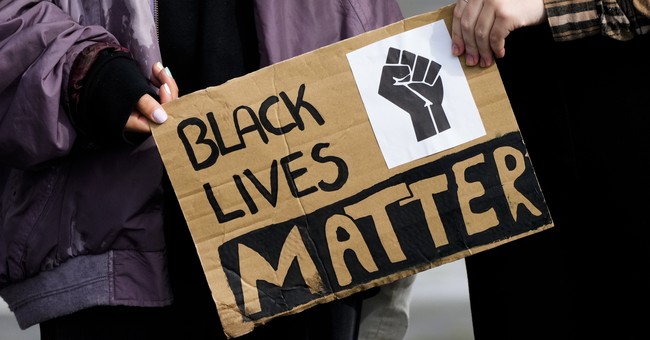 Photos sent by a concerned parent to national grassroots group Parents Defending Education show one wall covered with hanging LGBTQIA+, Palestine, Transgender, and Black Lives Matter flags while an American flag can be seen tossed over a piece of furniture in the corner.

Another photo shows anti-police and anti-American posters on the wall reading "F*** THE POLICE" and "F*** AMERIKKKA. THIS IS NATIVE LAND."

The anti-police poster claims that "Policing is a violent, anti-black, settler institution that originated as slave patrols. Their primary mandate is to protect property and to militarily enforce white supremacist capitalism. They are doing their jobs as they are trained and paid to do. You can't fix what isn't broken — that's why we fight for police and prison abolition."

The other "F*** AMERIKKKA" poster is emblazoned with the terms "settler colonialism," "genocide," "slavery," "imperialism," "war on drugs," "Jim Crow," and "prison labor" surrounded by photos of Christopher Columbus.

When Parents Defending Education reached out to the Los Angeles Unified School District to seek an explanation, officials responded with a statement that is full of the usual politically-correct blather education administrators are known for:

L.A. Unified holds firm in its policy that students and adults in both schools and offices should treat all persons equally and respectfully and refrain from the willful or negligent use of slurs against any person on the basis of race, language spoken, color, sex, religion, handicap, national origin, immigration status, age, sexual orientation, or political belief.

Apparently, equal treatment and respect don't apply to students whose parents are in law enforcement.

Across the nearly 630,000 students and about 30,000 teachers district-wide, individual teachers decorate their rooms in a variety of ways, with some decorations being directly tied to or in support of our district curriculum, while others are inclined to adorn based on their freedom of expression and individuality.

When utilizing decorations in our learning environments, all L.A. Unified teachers are expected to adhere to district policies and to be mindful of our mission to educate children in a classroom that reflects all our policies of inclusion and respectful treatment of individual rights.

Again, how "included" are students whose parents protect and serve the community? What about Jewish students who go to class and are forced to sit under a Palestinian flag?

Despite LAUSD's claim that teachers are decorating with the protection of their freedom of expression and individuality, Parents Defending Education points to legal precedent that "public employees are not insulated from employer discipline under the First Amendment when they make statements pursuant to their official duties" because "teachers speak on behalf of the school district when performing their duties in the classroom."

"When teachers make statements, advocate for particular points of view, and/or post specific items on walls or bulletin boards, they are acting pursuant to their official duties," PDE continues. "They do not have unfettered First Amendment rights."