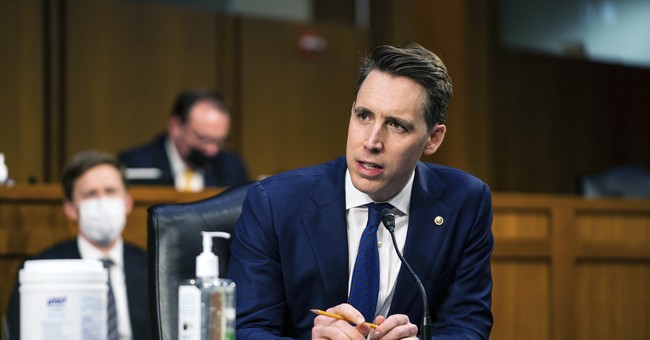 As Secretary of State Antony Blinken testified before the House Foreign Relations Committee Tuesday morning, Senator Josh Hawley (R-MO) took to the Senate floor to call for real accountability from President Biden for his humiliating and deadly exit from Afghanistan that left "hundreds of American civilians left behind to the enemy."

"President Biden turned an orderly evacuation into a disaster that much is painfully clear," Hawley said. "First, Joe Biden pulled our troops out, and then he sent thousands back in. He failed to protect Americans still in the country. He failed to account for lethal American military equipment he left behind. He failed to anticipate worsening conditions on the ground. He failed in his judgment that the Afghan security forces would hold their own when our own intelligence estimates said they wouldn't. He failed to anticipate a new offensive by the Taliban. He failed again, and again, and again, until American blood at the Kabul airport paid the price for that failure and then he celebrated it as an extraordinary success."

"Has a Commander in Chief ever celebrated as successful... the abandonment of American civilians to an enemy? The death of American soldiers? The terrorizing of American citizens and American allies?" @HawleyMO pic.twitter.com/4BFfT97F1l

Hawley noted that Biden is not the only individual who bears blame for the Afghan withdrawal disaster.

"Joe Biden's team is responsible too," he said. "Men like Secretary Austin, Secretary Blinken, Jake Sullivan the National Security Advisor. They overestimated the Afghan security forces' willingness to hold the line and instead of planning for the worst they planned for the best. Because of them, we have Americans stranded behind enemy lines and over 100,000 Afghan refugees arriving now to this country at this 11th hour without vetting or precations. This was never necessary. It did not have to be this way and it shouldn't have been. Joe Biden is responsible for today's failure and now there must be accountability."

"Instead, the President's team is even now coming to Capitol Hill and blaming others, shirking responsibility," said Hawley while Blinken testified nearby. "It's cowardly. And I for one am not willing to look the other way. So let me be clear. I will not consent to the nomination of any nominee for the Department of Defense or for the Department of State until Secretary Austin and Secretary Blinken and Jake Sullivan resign," pledged Hawley.

.@HawleyMO: This President is a disgrace. His behavior is disgraceful. He has dishonored this country with his shameful leadership in [the Afghanistan] crisis and it is time for him to resign. pic.twitter.com/CMC7Wu4pl9

Earlier this summer when American service members and Afghan citizens were killed by a suicide bomber amid the frenzied airlift that Biden ultimately ended before keeping his word to bring every American home, Hawley slammed Biden's failed leadership. "Joe Biden has now overseen the deadliest day for US troops in Afghanistan in over a decade, and the crisis grows worse by the hour. We must reject the falsehood peddled by a feckless president that this was the only option for withdrawal," he said. "This is the product of Joe Biden's catastrophic failure of leadership. It is now painfully clear he has neither the will nor the capacity to lead. He must resign."

To say that today’s loss of American lives in Kabul is sickening does not begin to do justice to what has happened. It is enraging. And Joe Biden is responsible. It is now clear beyond all doubt that he has neither the capacity nor the will to lead. He must resign