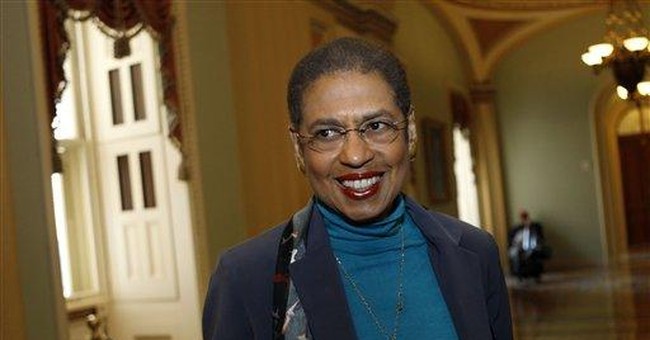 This writer was confused as anyone to find a press release from Eleanor Holmes Norton, the Democrat representing Washington, D.C. in Congress, declaring that she had not set zebras loose. Apparently, there have been several sightings of the striped equines near the nation's capital.

Some wild news is coming out of Prince George's County, where some neighbors have reportedly seen zebras on the loose. https://t.co/KfRRKsGFBu

Norton's statement "denying responsibility for letting loose the six zebras that have been on the run in the D.C. suburbs" was accompanied by what the representative says is a solid alibi that clears her name, albeit without corroboration.

WASHINGTON, D.C. – Congresswoman Eleanor Holmes Norton (D-DC) issued a statement today denying responsibility for letting loose the six zebras that have been on the run in the D.C. suburbs.

"Local news has reported that the zebras were let loose on Saturday or Sunday of last weekend, a period of time during which I was enjoying quiet time at home with family,” Norton claimed.

My alibi is solid, but given my career of fighting for statehood for the District, explaining the importance of having consent of the governed, and my recent opposition to fences, I can understand why the charge was made.

“My alibi is solid, but given my career of fighting for statehood for the District, which includes years of explaining the importance of having consent of the governed, and given my recent opposition to fences, I can understand why the charge was made," Norton added. "I hope the owners find the zebras and that all involved live long, full lives."

I hope the owners find the zebras safely and that all involved live long, full lives.

Reactions to what appears to be a publicity stunt by Norton's office to renew calls for D.C. statehood come as the Biden administration and Democrat-led Congress are mired in crises of leadership. After bungling the withdrawal from Afghanistan, Biden's top Pentagon and State Department brass are headed to testify on Capitol Hill in the coming weeks, where Democrat leaders in the House and Senate are still struggling to deliver the votes needed to pass Biden's woke infrastructure and budget reconciliation packages.

exactly what someone who let six zebras loose from the zoo would say https://t.co/rC0Dzkp4kf

I thought this tweet was a joke but this is truly a press release: https://t.co/B2idJKfFsO https://t.co/Pl4jKSvzpE

Eleanor Holmes Norton and her freedom zebras would be a group DC Halloween costume I would absolutely support.

Not A Single Soul:

Rep. Eleanor Holmes Norton: "I had absolutely no involvement with the releasing of zebras in the Maryland countryside."

Much like zebras that can't change their stripes, Congress is unlikely to change its focus from those items to focus again on D.C. statehood.