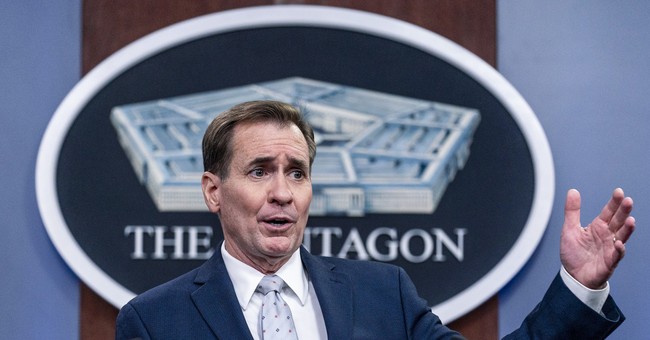 Pentagon Press Secretary John Kirby briefed reporters Thursday afternoon but no assurances of accountability when asked about any sort of after-action review of the Biden administration's withdrawal from Afghanistan and the chaos that led to an emergency airlift that ultimately resulted in Americans being left behind in the country.

"I'm not aware of a formal process here so I can't speak to a report," Kirby told reporters after Defense Secretary Lloyd Austin mentioned a review of the military's exit from Afghanistan would be done with humility and transparency. "It is... common practice for us to do after-action reports on almost everything that we do," Kirby explained.

KIRBY: "I'm not aware of a formal process" to conduct after action reports on the withdrawal from Afghanistan.

Concerning whether or not a report will be made public in the future, Kirby says: "I can't attest to that right now." pic.twitter.com/y6qdkvYgcN

"I have full expectations that as a department we will take the time to go back and look at this operation as the secretary said and try to learn lessons from it," he insisted before clarifying he "can't attest" to the eventual production of a formal report that would be made public. "We obviously will go back over the course of appropriate time and try to see what we could've done better and what we can learn from this operation," Kirby added.

Despite reiterating that "the military mission of evacuation is over [and] so too is the U.S. war in Afghanistan," the Pentagon apparently isn't working on nor guaranteeing it will release a report on the withdrawal that abandoned Americans and Afghan allies in an incomplete evacuation, criticism of which Kirby himself called "fair scrutiny" in Thursday's briefing.

After 20 years and a catastrophic exit, there isn’t a formal process.

The Biden administration's plan for withdrawal from Afghanistan unraveled in humiliating and deadly fashion starting in mid-August, and there are myriad areas where the American people — especially those who served our country in Afghanistan over the last 20 years — deserve answers: What intelligence did the Pentagon have on the intentions and capabilities of the Taliban? What chances did the Pentagon give the Afghan military of rebuffing Taliban offensives and maintaining control? What recommendations did the Pentagon make to President Biden as the Taliban gained ground and set its sights on Kabul? Did the Pentagon try to stop President Biden from misleading the American people on the reality on the ground in Afghanistan? Was anything offered or given to the Taliban as part of agreements made during the airlift? What did the Pentagon know about ISIS-K threats, when did it know strikes were imminent, and what options did it present Biden to mitigate that threat?

According to the Pentagon, there's not a formal process to get such answers. If an after-action report is conducted at some point in due time, those answers might not be public. Kirby's hemming and hawing suggests that the Pentagon brass and larger Biden administration remain set on avoiding accountability that could shatter the President's depiction of his Afghan exit as an "extraordinary success."