General Milley Says 'It's Possible' U.S. Will Coordinate with Taliban Terrorists on... Counterterrorism 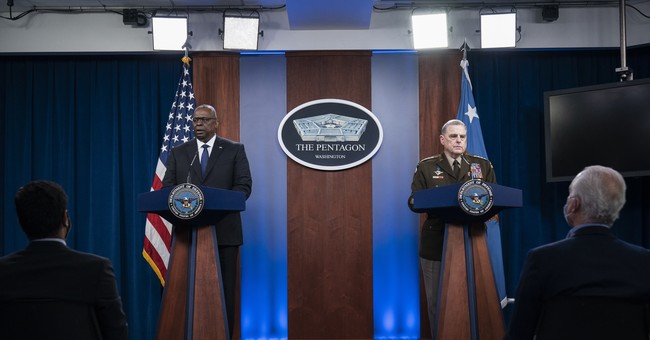 "We have concluded our historic evacuation operation," said Austin, repeating a line from his statement that failed to mention the Americans Biden left behind and said Pentagon leadership "executed" the mission to airlift Americans and allies.

"Now we have just concluded the largest air evacuation of civilians in American history. It was heroic. It was historic." pic.twitter.com/GMA1Ga8HNR

The work done by America's service members — past and present — to rescue many of those facing a dangerous future under a Taliban-controlled Afghanistan was indeed heroic. But what Pentagon brass and others in the Biden administration did — deciding to keep its promise to the Taliban of a no-condition August 31st withdrawal rather than honoring Biden's word to keep the military in place until every American had been evacuated — was not.

Without a military (or diplomatic) presence on the ground in Afghanistan following the withdrawal, promises from President Biden and others in the administration to strike ISIS-K targets are hard to keep without a coordinating partner. In the case of Afghanistan, that partner would be the Taliban. When asked whether the Pentagon would consider entering a counterterrorism partnership with the Taliban, Milley said "it's possible."

REPORTER: "Is there any possibility of coordination against ISIS-K with [the Taliban]?"

The Taliban is itself, of course, a terrorist organization that Milley admitted in the briefing is "ruthless." But that ruthlessness didn't stop the Biden administration from depending on the Taliban for security and Americans' safe passage amid the airlift. That decision raised eyebrows, especially after ISIS-K carried out a suicide attack that claimed the lives of 13 American service members and more than 100 Afghans.

"We don't know what the future of the Taliban is," Milley continued, apparently believing that the Taliban may suddenly decide to allow things such as music, education for women, and recognition of basic human rights under its control.

After calling on just three reporters for questions, Milley and Austin ended the briefing. Fox News' Jennifer Griffin responded on-air shortly after the end of the briefing.

"The fact that they didn't take very many questions is an admission that they know that there are a lot of very, very difficult questions right now that they don't really want to answer."@JenGriffinFNC responds after Austin and Milley briefed reporters at the Pentagon. pic.twitter.com/gugqys5Gsj