'We Are No Longer Respected': Donald Trump Blasts Biden in Hannity Exclusive 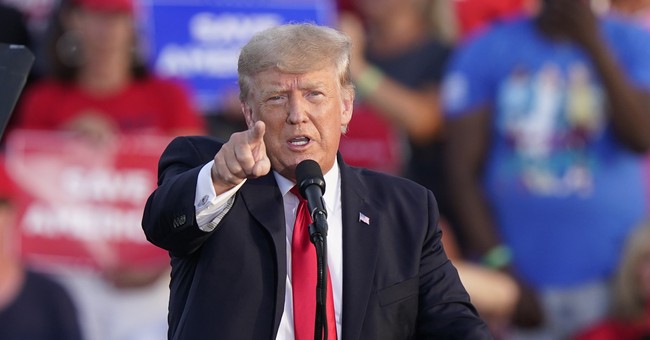 In an exclusive interview with Sean Hannity on Fox News Tuesday evening, 45th President of the United States Donald Trump didn't hold back in evaluating his successor's handling — or lack thereof — of the U.S. withdrawal from Afghanistan. By the end of his response to Hannity's first question, Trump had taken more questions about the chaos in Kabul than Joe Biden.

"It's a terrible time for our country," Trump remarked, "there's never been anything like what's happened here."

"I looked at that big monster cargo plane yesterday," said Trump of the horrifying viral video of a plane lifting off from Hamid Karzai International Airport in Kabul that seemed to show Afghan citizens "blowing off the plane from 2,000 feet up in the air... nobody has ever handled a withdrawal worse than Joe Biden."

Sharing what he'd have done differently, Trump described his priorities. "I'm America first, the Americans come out first," he said. "Then I was going to take out all the military equipment" the U.S. had brought over in the last two decades "that Russia will now be examining, and China," Trump cautioned. "Take the equipment out, and then take the soldiers out." Trump's last step, he added, would have been to "blow up all the forts" to leave the Taliban or other terror groups without any advantage.

Calling the scenes the world watched unfold across Afghanistan and in the eventual fall of Kabul "the greatest embarrassment in the history of the country," Trump blasted not only Biden but "a lot of generals that shouldn't be generals right now, frankly."

"We have the greatest military in the world and we're giving it a very bad reputation," Trump said of the Biden administration's nearly seven months in power.

Trump shared a conversation he had with the Taliban while he was in office in which he threatened "if anything bad happens to Americans — or anybody else — or you ever come over to our land, we'll hit you with a force that no country has ever been hit with before."

"We were respected all over the world," Trump said of his time in the White House. "I've never realized how important... a President, the head of this country is," he added. "We are no longer respected."

Warning again against the Biden administration's apparent reliance on Taliban goodwill to secure the safe passage of Americans and others being airlifted out of Afghanistan, Trump noted that the Taliban are "very brutal and they don't like to negotiate, and Biden put us in this position."

"You need a president that's respected, that got rid of ISIS," Trump added of his successor's lack of ability to achieve success on the world stage. "And he only returned because he was getting terrible press, he didn't return for any other reason," said Trump of Biden's brief appearance back at the White House this week to address the nation amid growing criticism.

In that address, after which President Biden took no questions, he blamed Trump and Afghanistan's political and military leadership — despite saying "the buck stops with me."

"When I came into office, I inherited a deal that President Trump negotiated with the Taliban," Biden said Monday, despite that narrative already being discredited by a growing chorus that includes The Wall Street Journal, POLITICO, The Washington Post, and others.