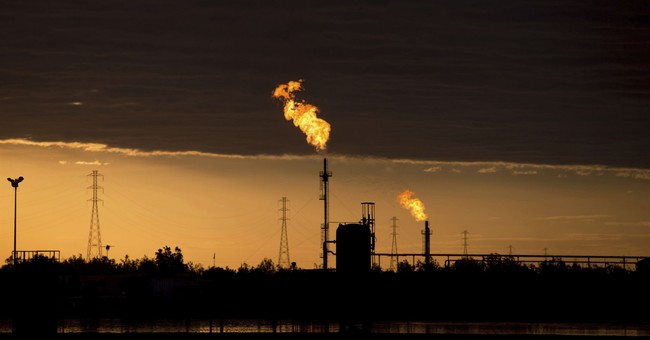 It's a rough week for President Biden who, despite a brief appearance at the White House in which he blamed others for his colossal mismanagement of our country's withdrawal from Afghanistan, has remained secluded at Camp David — and the hits just keep coming.

In a stinging rejection issued Monday, the Organization of Petroleum Exporting Countries (OPEC) denied Biden's request for more oil, saying that its member countries "and its allies, including Russia" — conveniently — think markets "do not need more oil than they plan to release in the coming months, despite U.S. pressure to add supplies to check an oil price rise," according to sources who spoke to Reuters.

Appearing weak on the world stage is already proving to be a drag on the Biden agenda, and now it's set to impact Americans at home as gas prices continue to rise thanks to record-setting inflation on Biden's watch that sent him begging for more oil after killing several domestic projects that would have kept the United States energy-independent.

As Katie reported, one of Biden's first acts as President was to stop the Keystone XL Pipeline, a move that "killed thousands of union jobs, halted an infrastructure project already underway and pushed the United States back into dependency on foreign energy sources," made worse when "Biden further exacerbated U.S. dependency by halting leases for oil and gas drilling on federal lands."

So yes, American dependence on foreign oil is another mismanagement of the Biden administration, but he apparently thought he could solve the problem of rising fuel prices by asking OPEC — to which the United States is not a party — for more oil after bungling the energy boom President Trump created that saw the U.S. not only energy-independent but an exporter of oil and natural gas.

FULL STATEMENT: The White House urges OPEC+ to pump more oil (above and beyond the current 400,000 b/d monthly hikes the cartel is already implementing) | #OOTT pic.twitter.com/qnWA1l7Pnt

"Higher gasoline costs, if left unchecked, risk harming the ongoing global recovery" fretted the White House's Jake Sullivan at the time Biden requested more oil from OPEC. "While OPEC+ recently agreed to production increases, these increases will not fully offset previous production cuts that OPEC+ imposed during the pandemic until well into 2022."

The OPEC sources mention of Russia is especially ironic, given Biden's decision to allow Russia's Nordstream 2 Pipeline project to move ahead after killing American pipeline projects — another apparent instance of Biden getting played on the world stage.

The White House has not done well trying to explain its fealty to Russian energy projects while blocking similar ones in the United States. Jen Psaki has her work cut out for her — as she did back in May — explaining what Biden will do now to address the rising cost of fuel prices in the U.S. after OPEC flatly rejected Biden's request to increase supply.

Peter Doocy battles Jen Psaki over the Biden administration refusing to sanction Russians over Nord Stream 2 and having done nothing to stop the pipeline's completion (even though he killed Keystone XL).