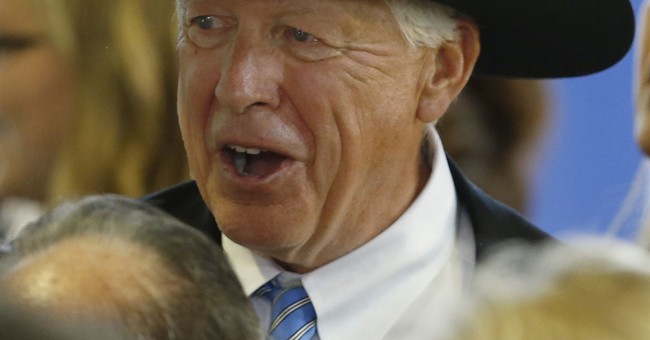 Foster Friess, a powerful voice and driving force in the conservative movement, died Thursday at 81.

Born in Wisconsin in 1940, Foster Friess built a life that was a testament to the American Dream. With a work ethic learned from his parents, Friess was the first in his family to go to college, attending the University of Wisconsin, where he met Lynnette Estes whom he married in 1962. The two had four children—two sons and two daughters—who brought them more than a dozen grandchildren.

Answering the call to serve, Friess served in the United States Army as an intelligence officer for the First Guided Missile Brigade out of El Paso, Texas, before retiring from the reserves as a Captain.

Foster and Lynnette founded their firm Friess Associates in 1974, kickstarting a wildly successful career in the financial world. The success Friess had in building a business allowed him to give back to many organizations, causes, and candidates who shared his values.

Friess received numerous accolades including the Muhammad Ali Humanitarian Award for his philanthropy, and he was named Humanitarian of the Year at the 2000 National Charity Awards Dinner. From disaster relief in the wake of Hurricane Katrina to community resources for disadvantaged youth, Friess supported a range of projects based on his belief that individuals and the private sector—not the government—can best provide help and solve problems. He has attributed his desire to help others to Galatians 6:2: “When we carry one another’s burdens we fulfill the law of Christ.”

In addition to humanitarian and charity work, Friess also invested in conservative media and youth outreach to ensure freedom's principles and conservative voices had a platform in media and education.

"We are grateful for the wonderful life Foster lived and thankful to the many people who have shared their prayers during his illness," his family said in a statement, adding "We know many of you mourn with us."

May our head wrangler Rest In Peace pic.twitter.com/h3KURPve4v

A true happy conservative warrior, Foster Friess—often decked out in a cowboy hat—found the lighter side in almost everything. We'll leave the last words to Friess who, in this 2019 video, helped families prepare to welcome woke grandchildren home for Thanksgiving.