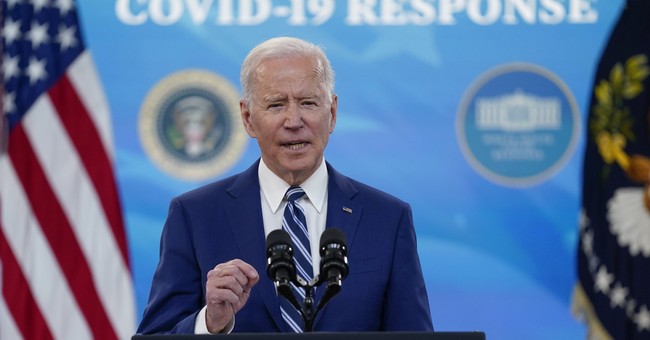 In a move that sent COVID vaccine manufacturers' stocks tumbling Wednesday, President Joe Biden is backing a plan to shred intellectual property protections for American entities that developed vaccines as the pandemic raged.

U.S. Trade Representative Katherine Tai announced the decision, claiming "The Administration believes strongly in intellectual property protections, but in service of ending this pandemic, supports the waiver of those protections for COVID-19 vaccines."

Already, Chinese-run state "media" are applauding the announcement that will hand their communist government American technology:

So global pressure works. And I hope it does not take forever for this to be a reality.

Sure, "global pressure works" when we have weak leadership in the White House ready to buddy up with genocidal communist tyrants at the detriment of American intellectual property.

The head of the World Health Organization—the group that has proven itself to be more ChiCom propaganda arm than public health agency—also praised the decision. Pro-tip: If CCP sympathizers are saying you made a good decision, that should be a clear sign you're making a mistake.

This is a monumental moment in the fight against #COVID19. The commitment by @POTUS Joe Biden & @USTradeRep @AmbassadorTai to support the waiver of IP protections on vaccines is a powerful example of ???? leadership to address global health challenges. pic.twitter.com/3iBt3jfdEr

This means hostile nations like China, Russia, and their ilk could grab American intellectual property and run, all because President Biden fancies himself to be some sort of pandemic Robinhood, stealing from American companies and giving to our nation's enemies.

Republican Senators Thom Tillis (NC) and Tom Cotton (AR) called Biden's decision "disastrous," adding "we support distributing vaccines to countries that need them, but not in a way that jeopardizes America's successful vaccine development. It's astonishing that President Biden is now providing the Chinese Communist party with access to America's intellectual property, medical research, and innovation."

American companies and institutions already struggle to protect their trade secrets and intellectual property from the espionage carried out by the Chinese Communist Party, and now—with the help of the World Trade Organization—the President of the United States is just giving away the formulations and processes used to create COVID vaccines.

Pundit-Doctor Anthony Fauci told POLITICO this week that America has a "moral obligation" to give away COVID vaccine patents. He joins a chorus of Democrats who scolded "a pandemic is not the time to fuss over intellectual property rights. It is a time to come together and crush the virus around the world."

But the process of hashing out the details of an agreement with the World Trade Organization could take months, and even if a WTO agreement is reached, the party countries would still have to carve up their intellectual property laws to gut the existing protections for however long the agreement requires.

In a statement, the Pharmaceutical Research and Manufacturers of America (PhRMA) blasted the Biden Administration's "unprecedented" decision to eliminate protections on vaccine patents "that will undermine our global response to the pandemic and compromise safety" and "further weaken already strained supply chains and foster the proliferation of counterfeit vaccines." PhRMA also points out that the proposed waiver "flies in the face of President Biden's stated policy of building up American infrastructure and creating jobs by handing over American innovations to countries looking to undermine our leadership in biomedical discovery."