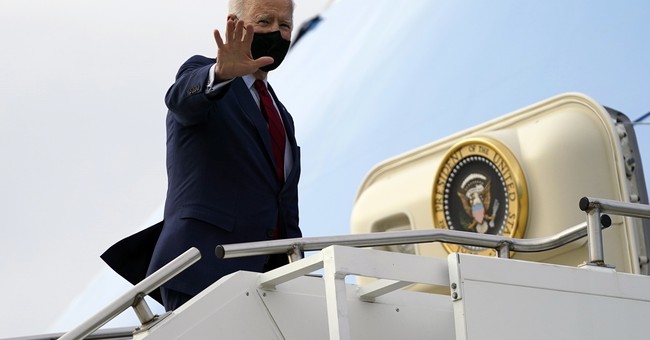 The day after making clear he wanted to unleash an era of big government in an address to a joint session of Congress, President Joe Biden traveled to Georgia on Thursday to begin making the case to throw trillions of dollars into expanding the federal government.

As Biden kicked off his speech to the car-bound crowd, chants of "end detention now" could be heard above the honking from attendees.

"We'll give you a microphone," responded Biden, clearly thrown off-script by the demonstrators' interruption.

The president engaged with them-and at one point said to give them a microphone.

(Several shouted that they voted for him) pic.twitter.com/7q0ehc3IQf

"Folks... Georgia was... 100 days ago today, when I was inaugurated on the steps of the United States Capitol to be your president, I was looking forward to coming back and seeing these guys."

WATCH: Pres. Biden is interrupted by protestors calling for the end of detention centers.

"Private detention centers should not exist and we are working to close all of them" https://t.co/konYfuLkmR pic.twitter.com/4N0kvYuU2X

Protestors also chanted "abolish ICE," and a man who yelled "we voted for you" could be heard pleading for Biden to "close all the detention centers now."

"I agree with you," responded Biden to the protestors' shouts. "I'm working on it, man. Give me another five days."

Biden speech interrupted by protesters shouting “end detention now” and “abolish ice”. They were escorted out by staff pic.twitter.com/KB70pqjlho

Biden's decision to mark his 100th day with a pitch for his disastrous spending spree is more than a little hypocritical for the president. Earlier in the April on Major League Baseball's opening day, he joined ESPN and said he "would strongly support" the MLB moving its All-Star Game out of Georgia over the state's new election law. Yet there he was, holding a drive-in rally in the state of which he'd encouraged a boycott.