'Inadequate to Address the Threat': Minnesota Governor Asks for Help Ahead of Chauvin Verdict 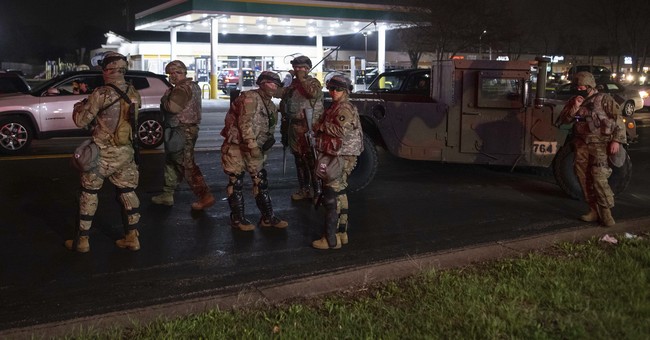 As jurors began deliberations in the trial of Derek Chauvin Monday, Minnesota Governor Tim Walz (D) issued an executive order declaring a state of emergency in several counties in and around the Twin Cities.

The threat to life and property is apparently so great that the Governor—who had previously issued an order activating the Minnesota National Guard on February 5 to respond to unrest surrounding the Chauvin trial—says "local and state resources have been fully deployed, but they are inadequate to address the threat."

Minnesota Governor says "local and state resources have been fully deployed" in response to last week's unrest in Brooklyn Center along with preparations in Minneapolis for the Chauvin verdict, "but they are inadequate to address the threat." pic.twitter.com/pT8A4sdvEW

In the order, Governor Walz notes that "the anticipated verdict in the Chauvin trial and the fatal police shooting of Daunte Wright have raised the potential of further civil unrest" in the Twin Cities and surrounding communities in Anoka, Carver, Dakota, Hennepin, Ramsey, Scott, and Washington counties:

Since April 11, 2021, when Daunte Wright died after being shot by a police officer, many Minnesotans have expressed their frustrations in a peaceful and constructive manner. However, some individuals have engaged in unlawful and dangerous activity, including looting and damaging public and private property. These activities threaten the safety of lawful demonstrators, people in the surrounding communities, and first responders. As such, local and state resources have been reallocated to assist in the unrest in Brooklyn Center and nearby communities. This reallocation has drawn resources away from the cities of Minneapolis and Saint Paul, and nearby communities, where there is a threat of civil unrest.

For these reasons, and to protect peace and safety, I declare a peacetime emergency in the sevencounty metropolitan area of Anoka, Carver, Dakota, Hennepin, Ramsey, Scott, and Washington counties and order state agencies, in cooperation with appropriate federal agencies and other states, to assist local units of government as they respond to and recover from this emergency.

Last week's violence in Brooklyn Center, Minnesota, following the officer-involved shooting death of Daunte Wright, "exhausted Minnesota’s local and state resources and are likely to hamper our ability to provide public safety and protect critical infrastructure and key resources" in the days ahead, Governor Walz admits.

This exhaustion of existing law enforcement resources caused the police chiefs and sheriffs in affected locales to ask Governor Walz to seek assistance from other states including Ohio and Nebraska.

City officials in Minneapolis and Brooklyn Center have recently barred their respective police departments from deploying tear gas and other tools used to control crowds and prevent looting, a decision that will make it even more difficult for police to curtail unlawful or violent activity.

Welp. Minneapolis is going to be engulfed in flames again. https://t.co/UAI8Ijjboa