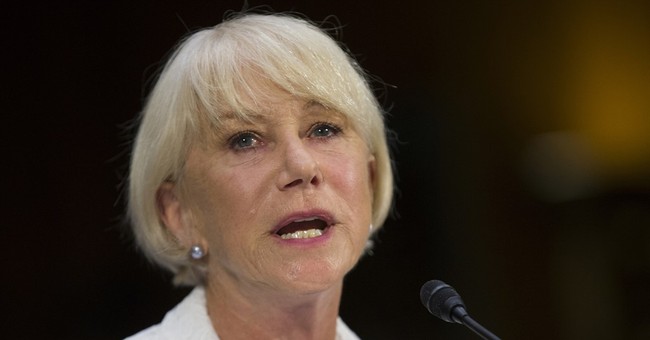 On a visit to Israel Wednesday, British actress Helen Mirren expressed her support of the Jewish state and denounced the movement to boycott it.

Mirren is in Jerusalem to award the Genesis Prize, considered the “Jewish Nobel,” to Israeli-American violinist Itzhak Perlman. The prize honors world-renowned artists with a “dedication” to Israel.

Speaking to press Monday, Mirren talked about her disdain for the pro-Palestinian movement to boycott, divest, and sanction all Jewish products and businesses—something many Hollywood stars have embraced wholeheartedly.

“I think that art is an incredibly important way of communication,” she said. “The artists of the country are the people you need to communicate with and make a relationship with and learn from and build upon. So I absolutely don't believe in the boycott, and here I am.”

Mirren has a long history of supporting Israel. She said she visited the country for the first time in 1967 and returned several times. She has played Jewish characters in the movies “The Debt” and “Woman in Gold” as well.

“My connection to Israel and the Jewish people has truly been a part of making me what I am today,” Mirren said. "I am a believer in Israel ... I think this is an extraordinary country filled with very, very extraordinary people.”

Mirren took her belief in Israel to Congress last week, testifying at a Senate hearing in support of a bill sponsored by Sen. Ted Cruz of Texas. The bill would make it easier for art stolen by the Nazis to be returned to Holocaust survivors and their families. Newsweek reported:

“Mirren testified during the hearing about her portrayal of Maria Altmann—a real-life Holocaust survivor who sought her family’s Gustav Klimt painting, Portrait of Adele Bloch-Bauer I, from the Austrian government—in the 2015 film Woman in Gold.

She continued, ‘Restitution is so much more, much more than that, than reclaiming a material good… It gives Jewish people and other victims of the Nazi terror the opportunity to reclaim their history, their culture, their memories and, most importantly, their families.’”

Mirren’s love of Israel was rewarded on her trip to the country this week. On Monday, the mayor of Jerusalem gave the actress the ‘Jerusalem of Gold Award for Excellence in the Arts and Humanities,’ according to the Times of Israel.

She also toured an archeological site of ancient Jerusalem and met with the British ambassador to Israel to honor the 400th anniversary of Shakespeare’s death.