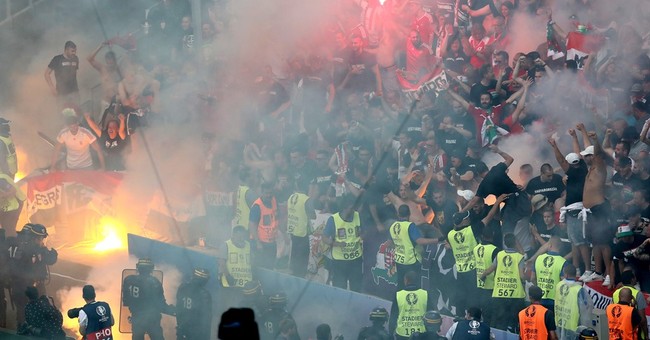 A Russian fan leader deported from France for violence during the Euro 2016 soccer tournament sneaked back into the country two days later, raising questions about France’s border security amid terror concerns.

The man, Alexander Shprygin, is the leader of a soccer fan union and sits on a Russian government commission planning the 2018 World Cup. Shprygin was one of the scores of rowdy Russian fans who have attacked British spectators and wreaked chaos during the Euro games this year.

Shprygin was expelled from France on Saturday but apparently slipped across the border by a land route Monday under the “cover of night,” according to pictures posted to his Twitter account. He boasted about his crime across social media, uploading pictures of himself at the stadium in Toulouse for a Russia v. Wales game before getting arrested again.

Shprygin’s stunt is the latest in a series of violent clashes between Russian and British fans. On June 11 in Marseille, the Russia-England match resulted in a 1-1 draw. Three days of violent riots featuring “racist behavior,” “use of fireworks,” and “dozens of injuries” followed, according to Sky News.

Though he denies his union is racist, Shprygin has admitted to “posting far-right symbols online”—something that the hosting organization, Union of European Football Associations, finds problematic. A group affiliated with UEFA said Shprygin “shows the mechanics of infiltration of the far-right into fan scenes.”

The fact that Shprygin crossed the border into France so easily has raised concerns about the ability for Islamic State fighters to enter the country. After the deadly terror attacks in Paris last November and the Charlie Hebdo shooting last January, France has been in a state of emergency. Officials said they tightened border controls amid worries about an attack on the tournament, but AP explained that the open-border policies of the European Union make vigilant security difficult.

“The land crossings between France and other members of Europe's border-free Schengen zone are still relatively porous, with armed officers only carrying out spot checks on train and car arrivals,” AP reported.

The Schengen zone is a region of 26 European countries in which travelers do not need to show passports or to go through border security.

Russia lost its match with Wales Monday, but the tournament continues until July 1. The troublemaking Russian fans may leave France soon, but the threat of Islamic terror will remain.