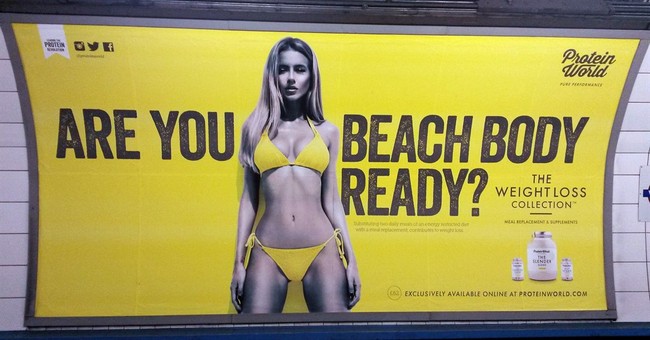 Mayor Sadiq Kahn of London has banned from public transportation advertisements that promote unhealthy body images. The mayor’s office announced the ban, which starts next month, on Tuesday.

Khan, who took office as the first Muslim mayor of the city in May, said that as the father of teenage daughters, he is worried about the impression advertisements can make on young women.

“I am extremely concerned about this kind of advertising [,] which can demean people, particularly women, and make them ashamed of their bodies. It is high time it came to an end,” Khan is quoted in a press release.

Kahn also asked the Transportation for London network to establish a review board that will decide which of the Tube advertisements pressures people to “conform to unhealthy or unrealistic body images.”

Critics have widely attacked the decision, saying it is too vague to be implemented properly, it suppresses advertisers’ rights to free speech and it caters to easily-offended ‘social justice warriors.’

The commercial development director for TfL defended the ban, arguing the permanent nature of advertisements in the Tube makes the transportation system responsible for censoring messaging.

“Our customers cannot simply switch off or turn a page if an advertisement offends or upsets them and we have a duty to ensure the copy we carry reflects that unique environment,” Director Graeme Craig said. “We want to encourage great advertising that engages people and enhances the transport network.”

Last April, London was at the center of a controversy about a “body-shaming” advertisement featuring a weight-loss product, a model wearing a bikini, and the words, “Are you beach body ready?”

The ad caused an international uproar, with Tube patrons scribbling messages like “#everydaysexism” and “If my body is on a beach, then it is ready” on the posters and posing in swimsuits in front of the ads. The ads were eventually removed, but consumer support for the company generated more than $1.5 million in revenue in four days, Breitbart reported.

Academic research supports Khan’s claim that young women are influenced by advertisements’ idealized portrayals of beauty. A study from the American Academy of Pediatrics from 1999 found that “47% of the girls were influenced by magazine pictures to want to lose weight, but only 29% were actually overweight.”

Further, “Girls who were already dissatisfied with their bodies showed more dieting, anxiety, and bulimic symptoms after prolonged exposure to fashion and advertising images in a teen girl magazine.”

The question remains, however: should the mayor have taken this far-reaching action? Some have accused the mayor of applying the Muslim values of intense modesty to London. A transport official denied the claims, linking the ban to mental health considerations.

The mayor’s office has not named any criteria by which advertising content must abide. Are all pictures of models in swimsuits banned? What about pictures of thin models (how thin is too thin?), or advertisements about ice cream or cookies or potato chips? Can fast food restaurants run ads? Khan’s vague policy can quickly turn into a slippery slope of censorship.

TfL announced it will also publish an annual report reviewing all the advertising campaigns that run in public transport.