Who Is Peru's Next President? No One Knows Yet 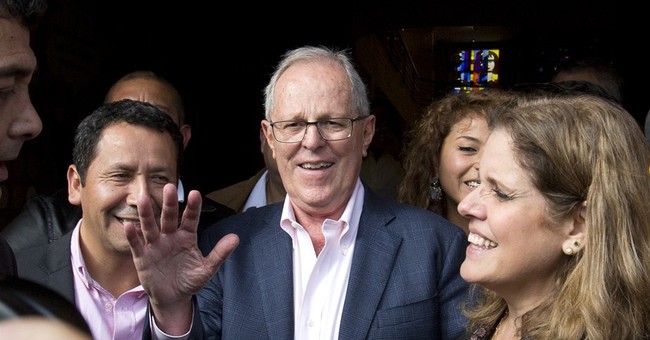 Peru’s presidential race is a nail-biter. It has been four days since the election, but hundreds of thousands of votes still are not tallied. To make matters worse, the two candidates are neck-and-neck, reportedly at 50.1 and 49.9 percent.

Pedro Pablo Kuczynski, a former economist, is pulling off a slight lead over Keiko Fujimori, the daughter of jailed former President Alberto Fujimori, with 99.5 percent of the polling stations counted, according to AP.

“We wait with calm, vigilant and sure of the great work of our hundreds of officials,” Kuczynski tweeted after the election. “Our votes are protected!”

Peruvians living abroad cast about 885,000 votes, which were still being counted Thursday. AP reported that officials are also analyzing nearly 700 handwritten tallies from polling stations that account for around 200,000 votes.

A National Review article expressed hope that with a Kuczynski presidency, Peru would adopt a more moderate international stance—a plus for the United States and a rarity amongst the predominantly populist governments of Latin America. José Cárdenas, a foreign policy expert, wrote:

“The 77-year-old Kuczynski is the son of a Jewish-Polish immigrant. PPK, as he is widely known, is very familiar to U.S. officials. A former World Bank official, Wall Street banker, and finance minister, he is a Princeton-educated economist who has lived many years in the U.S. and is married to an American. He is a fiscal conservative, a free-trader, and a technocrat.”

Kuczynski was far behind Fujimori earlier in the race, but near the end he reminded voters of the horrors of her father’s corrupt ten-year presidency. He is serving 25 years in prison for “ties to the corruption, organized crime and death squads,” according to AP.

This election is the tightest since 1962, which resulted in a military coup. Many South American countries have long struggled with corruption, coups, and authoritarian leaders; perhaps Kuczynski would be a breath of fresh air for Peru.