Terrorists Are Ignoring This Sacred Rule of War 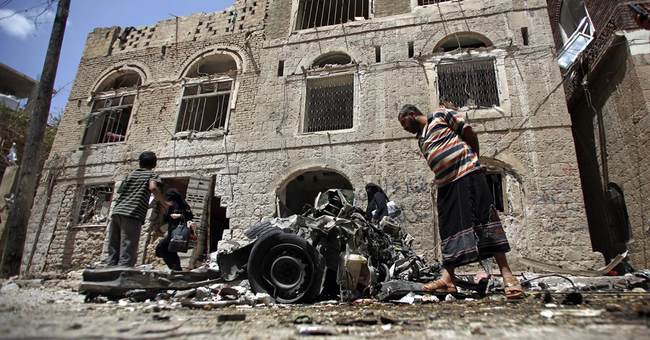 The World Health Organization reported Thursday that nearly 960 people have been killed in 594 attacks on hospitals and clinics around the world over the past two years. Experts said that these unusually high numbers represent a loss of belief in the sanctity of medical facilities during war.

The Geneva Convention accords name the targeting of medical facilities, doctors, and patients as a war crime, but international relations officials said forces in countries like Syria, Central African Republic, and Pakistan are largely ignoring this norm. The 228 attacks in Syria alone in the last two years accounted for almost 40 percent of the WHO total.

“Syrian President Bashar Assad and the Russian forces that back him have been accused of deliberately striking hospitals to make life in opposition-held areas unlivable,” AP reported.

"Why do they continue? It's a lack of respect, or ignorance, or dismissal of international humanitarian law," said Rick Brennan, the director of WHO’s emergency risk management.

When hospitals are bombed and doctors are attacked, essential medical care cannot be performed, Brennan said. For example, workers administering polio vaccines in Pakistan are routinely killed by the Taliban, according to a report by National Geographic.

“The Taliban began assassinating polio workers the year after the CIA used a vaccination campaign for hepatitis B, not polio, to identify Osama bin Laden's hideout in Abbottabad,” National Geographic reported.

Health workers in the Middle East can work in environments unfriendly or suspicious of modern medicine, further influencing the high WHO statistics.

“The crippling effects of polio were seen as a curse from God, a punishment, never mind that the paralysis usually struck blameless infants,” National Geographic reported. “Instead of being seen as a cure, the polio drops were widely cast as part of a Western conspiracy to sterilize Muslims.”

"This is a huge problem," said Bruce Aylward, the head of emergency response at WHO. "Attacks on health workers are not isolated, they are not accidental and they are not stopping."

The United Nations Security Council held a meeting in January in which Deputy Secretary-General Jan Eliasson of Sweden commented on the prevalence of attacks on medical care facilities.

“Hospitals must be treated as sanctuaries in wartime,” Eliasson said. “Today, I echo the words of the Secretary-General and of the president of the International Committee of the Red Cross, Peter Maurer… ‘Enough is enough. Even war has rules. It is time to enforce them.’”