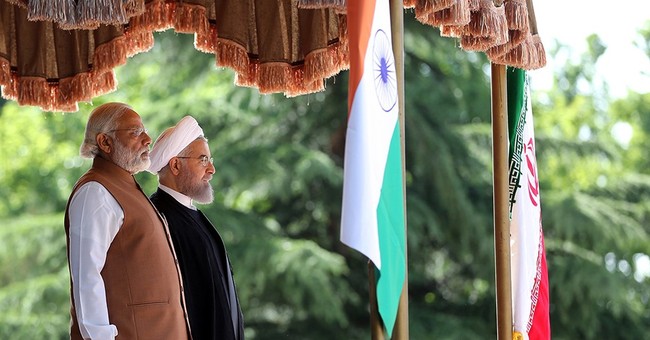 India and Iran signed a series of agreements Monday that will increase trade between the two countries and pour billions of dollars into Iran’s economy. This comes less than five months after the U.S. and European Union lifted its economic sanctions on the state sponsor of terrorism.

Indian Prime Minister Narendra Modi and Iranian President Hassan Rouhani met in Tehran, signing a deal that will enable the development of Iran’s Chabahar port. India has a vested interest in building the port, as it gives India access to Russian and Central Asian markets.

Quartz interviewed a former diplomat who served as the Indian high commissioner to Pakistan, G Parthasarathy, who said India’s access to nearby Chabahar is essential because exports currently must travel on an out-of-the-way path around Pakistan.

“It (Pakistan) deliberately delays transit of our goods through Karachi, which is not a reliable or efficient port of transit,” Parthasarathy said. “This is more so when it comes to sensitive items like defense supplies. We, therefore, have to transit through the Iranian port of Bandar Abbas, which is some distance away, making exports more expensive and slow.”

Modi pledged that India will spend $500 million building the port and invest another $16 billion in the Chabahar free trade zone. Experts say this deluge of cash will affect the economies of both India and Iran.

For India, this access to new markets allows the country to expand trade to countries such as Afghanistan, Russia, Turkmenistan, and Kazakhstan. Partnerships and new resources await India when they reach these countries, according to Christine Fair, an associate professor at Georgetown University.

“Iran is the only way for India to conduct trade with Central Asia and Russia,” Fair said. “Thus, this port is critical to Indian power projection in to Central Asia and elsewhere. Also, India has significant hydrocarbon needs and Iran will remain an important source.”

India Today reported Monday that Indian firms want to use the crude oil resources in Iran to build an aluminum smelter plant.

Iran has been eager to involve itself in the world’s economy since the U.S. and EU lifted their sanctions in January. Soon after, its government signed a deal with China to increase trade there to $600 billion in the next ten years. Now India has solidified its ties to the state as well.

India, a rising power in Asia, has relationships with states in the Middle East—Israel, Saudi Arabia, United Arab Emirates. Some experts are concerned that it will be difficult to maintain partnerships with states that have such opposing interests, but Sanjaya Baru of the International Institute for Strategic Studies is not worried.

“India now maintains a balanced West Asian policy of maintaining good relations with Saudi Sunnis, Iranian Shias and Israel’s Jews,” Baru said. “It is a policy all three have come to understand, perhaps even appreciate.”

The nuclear deal between the U.S., five other world powers, and Iran was widely criticized when it was signed in 2015. Many worried the country would not comply with the weak nuclear disarmament provisions in the deal. Despite this, the U.S. went forward with it; in January sanctions were lifted. It remains to be seen if Iran, who has made progress in constructing a nuclear weapon and funds terrorist organizations such as Hezbollah, will make good on its promises and implement India’s desired free-trade policies.