Can The U.S. Help Venezuela Militarily Without Use Of Force? 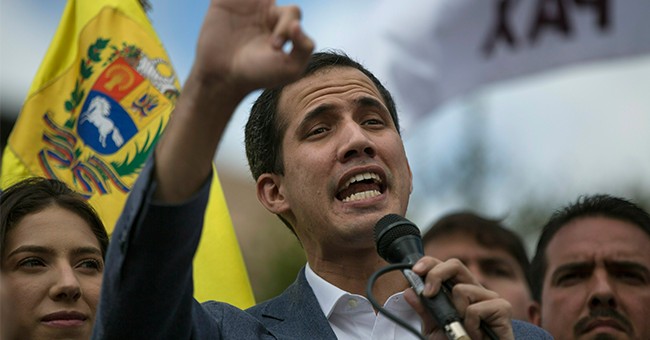 Lawmakers are debating whether the U.S. should proceed with military action in Venezuela to help end the socialist Maduro regime even as debate about whether or not the U.S. has a responsibility to protect Venezuela — and if there are ways the military can be utilized without use of force.

Republican Sen. Todd Young of Indiana, who sits on the Foreign Relations Committee and is a Marine Corp veteran, has sounded the alarm about the Trump administration moving unilaterally on a military mission to the embattled South American nation and has called for immediate congressional hearings on the matter.

Young said that as much as he would like to see Maduro ousted, he's not sure if U.S. military involvement is the right way to achieve that goal.

“We have a brutal socialist regime in Venezuela that has caused unspeakable suffering among the Venezuelan populace,” Young said. But he’s worried about the possible consequences of U.S. military involvement in Venezuela – and unsettled by the escalating rhetoric from top Trump administration officials.

“The first step…is calling on the administration to explain their thinking for threatening military action in the press,” said Young, who sits on the Senate Foreign Relations Committee. “If hostilities are imminent, then we need to know why.”

While the Trump administration weighs their options — with some members such as National Security Adviser John Bolton pushing hard for military intervention — a representative for The Organization of American States (OAS) spoke at an event Wednesday at the Center for Strategic and International Studies (CSIS) discussing Venezuela in relation to the 2005 United Nations guidelines covering the “responsibility to protect” policy, or R2P.

R2P is a commitment by UN member nations to act to prevent genocide, war crimes, ethnic cleansing, and crimes against humanity.

Luis Almagro, Secretary General of the OAS, detailed the reasons he believes the U.S. and other nations would be justified in entering Venezuela and using force if necessary under UN guidelines.

“Politics timing is different” from the timing of the people suffering, Almagro said, indicating that in some ways the world is too late for the Venezuelan people who are starving and leaving the country by the millions. He said the violence by Cuban paramilitary “colectivos” was being “micromanaged” by the regime.

He also said that soft warnings must be followed by hard actions or the “colectivos,” Iranian members of Hezbollah, and the corrupt Maduro regime would never leave of their own accord. Almagro noted Maduro had systematically refused any attempt at international cooperation.

While the Trump administration continues conversations with nations such as Russia and Iran, as Secretary of State Mike Pompeo did this week, some are noting that military intervention doesn’t necessarily have to mean use of force.

“There are non-kinetic ways the US military can force Maduro’s hand without deploying mass forces, occupying Caracas or risking conflict escalation,” writes Lionel Beehner, an assistant professor and director of research at West Point's Modern War Institute. “How? By supporting the opposition with nonviolent actions. The US military is uniquely positioned to assist on this front, given what it does best: strategic planning.”

How would it work? U.S. special forces, next door in Colombia to assist that country’s armed forces, would train the Venezuelan opposition in best practices of nonviolent resistance. This includes teaching tactics of dispersal, evading tear gas, erecting barricades, and maintaining command and control in the face of government repression. Contrary to public perception, the U.S. military actually has a decent track record in the region. In Colombia, U.S. assistance and support helped repair its military’s poor human rights record, paving the way for peace.

But can nonviolent resistance work? A new report by the Joint Special Operations University on Support to Resistance (STR) operations suggests it can.

With the Maduro regime arresting opposition leader Juan Guaido’s ally, National Assembly Vice President Edgar Zambrano, Wednesday, the U.S. may need to make a decision quickly on just how to help its neighbor to the south.