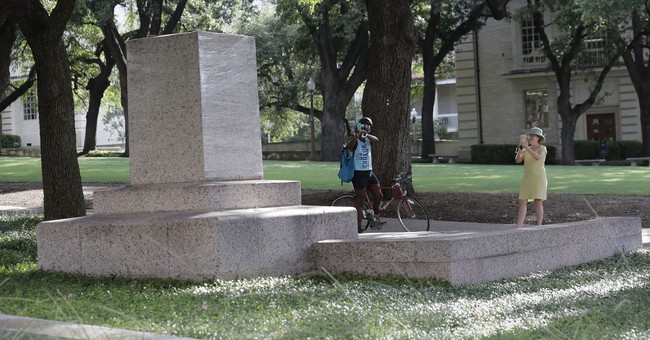 Nicole Neily, President and Founder of Speech First, in describing why her organization filed a lawsuit against what she calls the “inclusion bureaucracy” at the University of Texas (UT) last week, recounts how much of what’s happening on campuses today reminds her of the 2006 German-language film,“The Lives of Others.”

That film, a powerful examination of life behind East Germany’s Iron Curtain four years before the fall of the Berlin Wall in 1989, is punctuated by a pervasive feeling that no one character in the film can trust any other character – no matter the relationship.

“You remember in that movie, how friends and neighbors were turning each other in?,” Neily asks, recalling the power of the Stasi, or secret police, portrayed in the film, who in real life operated a surveillance state for almost 50 years to keep the ruling Communist party “safe” from those who would criticize her. “It’s so unhealthy for society, and we’re teaching our kids [on campus] to do that; to run and tell authorities if they hear something they don’t like or that isn’t what’s deemed ‘acceptable’ discourse. It’s infantilizing.”

Neily, as head of the nonprofit membership association dedicated to ferreting out and battling speech restrictions and other civil rights violations at U.S. colleges and university campuses, is in a unique position to try to do something about it.

And so her organization has.

On Dec. 13, Speech First filed a federal civil rights suit against the University of Texas – SpeechFirst vs. Fenves et. al.— in which they allege “the overbroad nature and vagueness inherent in the school’s verbal harassment ban, Acceptable Use Policy, Residence Hall Manual, and Campus Climate Response Team present serious risks that they will be enforced in an arbitrary or discriminatory manner and may be used to target speech based on a speaker’s viewpoint.”

“Without a doubt, the University of Texas has failed to appropriately safeguard students’ First Amendment rights,” Neily said in the statement announcing the suit. “Students deserve to be able to express themselves and voice their opinions without fear of investigation or punishment – which is why these policies must be reformed.”

Speech First is looking for the federal judge in the case to declare the speech code at UT unconstitutional and to enjoin the Campus Response Team that she says has created a self-perpetuating environment where “people see microaggressions around every corner.”

“I can’t imagine a culture where students are encouraged to report on their fellow students isn’tchilling speech,” Neily says. “The problem is that while there are over 100 cases of ‘bias expression’, the Campus Response Team provides very few details about those cases, what those ‘expressions’ actually were.”

However, Neily says, the language about who can report a bias expression is much more robust — and frightening.

“It can be a third party who just heard about it,” Neily says. “That’s a really scary thing to me. In a real court of law, that wouldn’t pass muster; but in one of these campus proceedings it’s ok? These allegations can destroy someone’s life.”

And Neily says the implications of “naming, shaming, and shutting down” speech carry over into the post-graduate world when students begin to expect similar accommodations for turning people in to authorities. She cites the situation with James Damore at Google and Kevin Hart’s recent Oscar disinvitation as evidence.

Neily also mentions that chilling speech not only affects the holder of the “questionable” opinion, but it impairs the right of all people to listen and make up their own minds in a free society.

“We should be allowed to hear opinions and decide for ourselves,” Neily says. “Anything less is patronizing and condescending. We are teaching our kids that instead of addressing something they might not like with their own voices, the should run and tell the authorities. It’s as if we’re teaching them how to defer to big brother.”