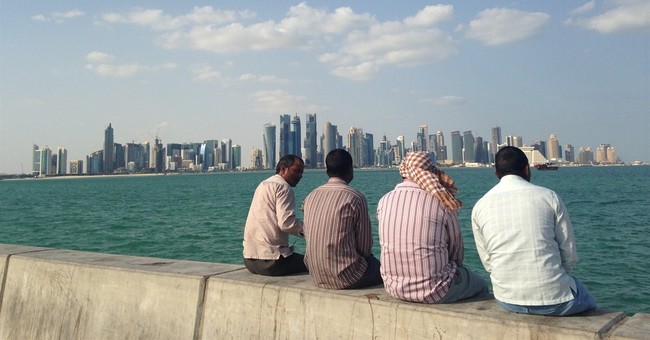 The FIFA World Cup, the globe’s largest soccer tournament, will be held in the Middle East for the first time in 2022, and already things are not going well.

While Qatar had promised to reform its working conditions, a recent report found that the government is literally working people to death in the 122 degree heat. Migrants building the 2022 soccer stadium died at a rate of one every two days in the year 2014.

The figure excludes deaths of Indian, Sri Lankan and Bangladeshi workers, raising fears that if fatalities among all migrants were taken into account the toll would almost certainly be more than one a day.

Qatar had vowed to reform the industry after the Guardian exposed the desperate plight of many of its migrant workers last year. The government commissioned an investigation by the international law firm DLA Piper and promised to implement recommendations listed in a report published in May.

But human rights organisations have accused Qatar of dragging its feet on the modest reforms, saying not enough is being done to investigate the effect of working long hours in temperatures that regularly top 50C.

Even when bidding for the 2022 location began, the Arab country of Qatar was accused of using millions of dollars in bribes to gain support from FIFA committee members. The board’s selection was no doubt a curious for the gathering of an international community.

From June until September, the average temperature in Qatar is over 100 degrees, with only three inches of annual rainfall. Not exactly the best location for athletes to run around like maniacs during a rigorous summer sporting event.

German weather researchers Andreas Matzarakis and Dominik Fro¨hlich,  discovered that even sedentary visitors will be at a high risk of heat stroke, which can result in organ damage or death.

However, there is one fact which may help reduce dehydration—there will probably be no alcohol consumption at the games. Yes, that's right, it is illegal to imbibe in Qatar.

And there's more: homosexuals are not only banned from living in Qatar, the country may be using a medical "gaydar" device to screen visitors. If the device shows a positive result for homosexuality, foreigners would be refused entry. So, even if you look like you might be gay, this could be a compromising experience.

So why on earth is the soccer tournament going to be held in Qatar? Well according to FIFA executive committee member Theo Zwanziger, the first World Cup in the Middle East will leave a positive legacy and will "be a platform that brings people together."

Really? So far it seems the only legacy Qatar is amping up to leave is one of intolerance and a lack of respect for human life.