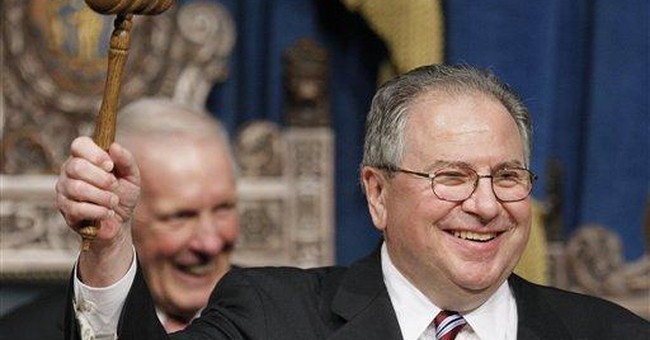 As reported by the Boston Herald:

The bill, called the state’s most comprehensive since 1998 by House leaders, adds the state to a nationwide criminal background database and, for the first time, allows local police chiefs discretion in licensing owners for shotguns and rifles. The legislation also bans the private sale of guns without a licensed gun dealer and requires gun owners to list all the guns they own each time they renew their license.

“I knew that Massachusetts would take a different path than other states,” said DeLeo, who chided other states for legislation that was “hastily proposed” in the aftermath of the massacre at Newtown’s Sandy Hook elementary school in December 2012. “What is in this legislation is very, very reasonable.”

Asked if the bill gives Massachusetts the country’s toughest gun laws, DeLeo said, “The only thing I’m looking for is to show we’re the most effective state in terms of gun laws in the country.”

Gun control advocates repeatedly ignore the studies which show “where firearms are most dense violent crime rates are lowest, and where guns are least dense violent crime rates are highest.” This inverse correlation between gun ownership and crime is easily observed in places like Illinois. Crimes rates dropped to their lowest since 1958 this April after concealed carry was finally made legal in the state.

An individual who is breaking into a home or shooting human beings is obviously not acting in compliance to the law. Consider the recent North Carolina restaurant; it was robbed at gunpoint despite the prominent “no weapons” sign displayed on the door. Creating more laws only prohibits the average citizen from easily protecting himself.

One positive aspect of bill HD4253 is its focus on mental illness. While the full text does not seem to be available, you can read a summary here.

DeLeo would like the legislation on Governor Deval Patrick’s desk before July 31.