Dick Durbin: People Criticizing Democrats for Spending Too Much Money Are 'Trying to Rewrite History' 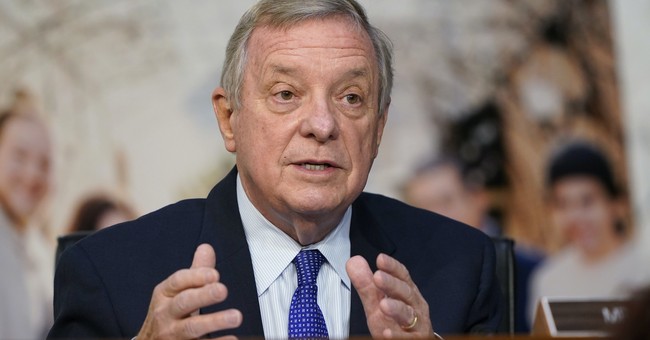 Democrats have had quite the tone-deaf response to inflation on Tuesday. Before the Biden administration celebrated the misnamed "Inflation Reduction Act" outside the White House, the August Consumer Price Index (CPI) numbers came in, showing a 0.1 percent increase in inflation for August, and 8.3 percent over the past 12 months.

Sen. Dick Durbin (D-IL), who also serves as the Senate majority whip, appeared on CNBC's "Squawk Box" to continue the trend of gaslighting on the numbers and dismissing concerns that the American people may have about inflation. Our friends at Twitchy highlighted a clip of his appearance, as well as reactions to his remarks and the numbers overall.

“There are a lot of people … trying to rewrite history” pic.twitter.com/cRpdsukz5B

Co-host Joe Kernen pointed out that "there's a lot of people, and not just Republicans, that say we've just spent too much money." He went on to list examples of how "we issued a lot of, um, debt, a lot of dollars, what the Fed did, a lotta programs" as supposed relief from the COVID-19 pandemic, as well legislation from this year that President Joe Biden as celebrated, including not just the "Inflation Reduction Act," but also the CHIPS Act, and "student loan forgiveness."

He went on to ask Durbin if he had "any second thoughts whatsoever about maybe that that’s adding to the problems." Kern also added "and, you know, here we are, the Feds gotta basically orchestrate a recession, which hurts everybody, just, sort of, deal with all the overspending we’ve done," as he also went on to ask Durbin if there's "any truth to that, in your view?"

Durbin's response was to dismiss those people and say "they basically shouldn’t try to rewrite history," before he went on to sing the praises of Biden and the Democratic Party. "What we went through with the pandemic was unprecedented in the economy of America. A sustained period of time where there was a virtual time-out and a real question as to recovery. Look what’s happened with the number of people, the number of jobs that have been created under this president just in the last year and a half. And we see a lot of activity that is encouraging."

While Durbin's response did eventually acknowledge the pain Americans feel from inflation, it wasn't very sincere, especially when he went with the narrative of how gasoline prices are down, which, by the way, are still higher than what they were when Donald Trump was in office. "Yes, there are the fires of inflation, and American families are fighting them, but gasoline prices are coming down, thank goodness, uh, and that’s a good indicator for a lot of Americans that they can have a little more confidence in the future of the economy," he said.

The clip still has Durbin leaving things off on a self-congratulatory note. "Now I look back on it, I really believe that what we did was extraordinary, but the circumstances were unprecedented in our history. We had to sustain businesses and their employees during one of the most difficult periods in our history," he claimed.

It's worth emphasizing that Kernen made a point to say it's not just Republicans who have concerns that we're spending too much money. Durbin is not merely dismissing his political opponents, but the American people overall as well.

Katie, in addition to highlighting the Democrats' celebration that would come later that same day, also called out the president and his administration over Twitter.

Millions of retirees had their savings completely wiped out thanks to the American Rescue Plan, which rocketed inflation to record levels. Biden and the Democrats did this. Gaslighting. https://t.co/feTSyk6iFE

Sen. Durbin also make remarks about inflation from the Senate floor earlier this month, in which he memorably claimed that "inflation is in fact slowing."

Other gaslighting came from Democratic allies in the mainstream media, specifically The Washington Post, where Abha Bhattarai wrote a piece claiming "Americans are finally feeling better about the economy." On inflation, she claimed that Americans "are more resigned to inflation," and "learning to deal with higher prices." The piece, from last Saturday, is her most recent one, so there's no word yet as to if she's written another piece trying to spin something else in favor of the Biden administration.

With such performances on inflation, and a preoccupation with other issues, namely abortion, it's almost like the Democratic Party is trying to lose one or both chambers in the midterms, all while claiming they're going to win.