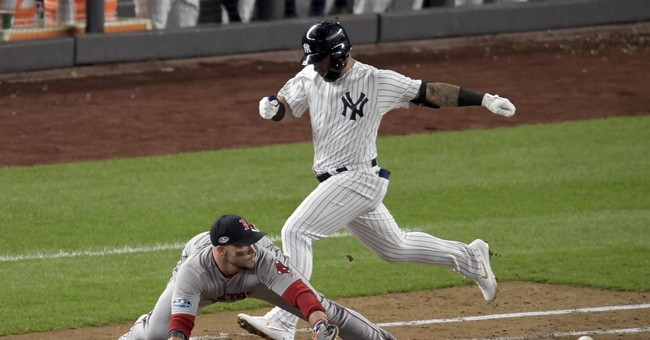 In a series of tweets on Thursday night, the New York Yankees and Tampa Bay Rays forewent discussing baseball game coverage and instead took to tweeting out "facts about the impacts of gun violence" following the tragic Uvalde shooting on Tuesday that left 19 school children and two teachers dead. The recent shooting in Buffalo was also referenced.

At least nine such facts were tweeted out, along with citations to the Centers for Disease Control (CDC), and various studies and surveys. The one gaining particular attention, though, took the virtue signaling a step further.

Yup, they went there. The Yankees took to tweeting about "Latinx people," which people definitely shared their thoughts about.

Actually, zero Latinx people have died from gun violence because there is no such thing as a Latinx person https://t.co/PJLQqWeviM

you’re a baseball team, and Latinx isn’t a word

Latinx is a slur made up by woke bigots.

"Latinx" is a slur to the Latino and Hispanic community. 98% of Latinos don’t want to be called Latinx. Corporate America worships at the altar of left wing lunacy now. It’s absolutely disgusting. Knock it off.

In a quoted retweet, one user offered that Everytown for Gun Safety wrote the tweet's text.

You can tell that Everytown wrote this because they're the only major gun control group that regularly says Latinx https://t.co/lUMvmGOwFh

The Tampa Bay Rays tweeted the same language, too. Their team actually has mentioned that the teams would be tweeting out gun facts instead of game coverage as their pinned tweet at this time.

The List warned that the team might be included in their roundup of tweets from people who need their phones taken away.

"Latinx" has been trending on Twitter as a result. The Twitter explained noted that "People discuss the word ‘Latinx,’ a gender-neutral term that is sometimes used in place of Latino/Latina, after the New York Yankees used it in a Tweet about gun violence."

It's not just Twitter users that took issue with the term. Polls consistently show that the Hispanic community overwhelmingly rejects the term as well, whom the term is meant to describe as a way to be "gender neutral."

One recent survey conducted April 20-May 3 from the City of Los Angeles of 1,100 Latino registered voters showed that just 1 percent prefer to be called "Latinx."

The Yankees and the Rays are also the home teams for cities with significant Hispanic populations. According to data from the Census Bureau updated last July, Hispanic or Latino residents account for 28.9 percent of the population in New York City. In Tampa Bay, it's similarly 26.2 percent.

Thursday's tweets weren't the only time sports have waded into the issue at the expense of talking about the sport at hand.

As Matt covered, Golden State Warriors Coach Steve Kerr gave an impassioned speech on Tuesday and pounded the table as he ranted in favor of gun control legislation and against Republicans. According to a deep dive analysis from Mia earlier on Friday, Kerr has not only been involved in gun control efforts before, but also calling for schools to remove police officers from their campuses in Oakland in the wake of George Floyd's death.