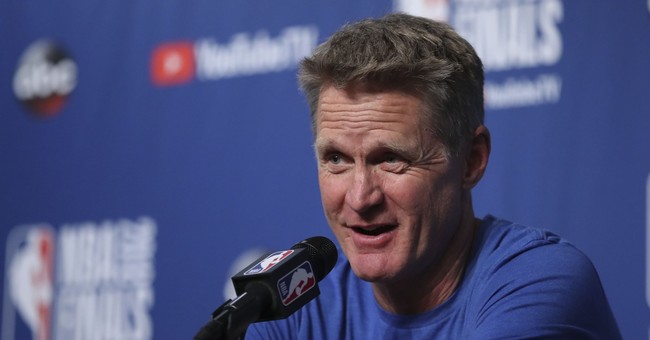 I can handle sports being infested with liberals to a point. It's a business with a heavy social media presence. Like corporate America, sports teams' staff also enter the left-wing echo chamber and think Twitter represents most of America. It doesn't. The platform is for crazy people and partisans, which is also why I like Twitter. Yet, Golden State Warriors head coach Steve Kerr, who is being propped up by the woke sports press for his call for gun control, was never asked a key question that Outkick's Clay Travis aptly pointed out last night.

As you already know, a horrible mass shooting occurred yesterday afternoon in Uvalde, Texas. The 18-year-old shooter barricaded himself inside a classroom at Robb Elementary School, killing 19 young students and two teachers. The shooter was also killed. A Border Patrol agent, Uvalde is a small border city, rushed into the fray without backup and neutralized the threat.

Kerr then made this plea (via ESPN):

Golden State Warriors coach Steve Kerr did not want to talk about basketball in his pregame news conference heading into Game 4 of the Western Conference finals against the Dallas Mavericks on Tuesday night.

"Since we left shootaround, 14 children were killed, 400 miles from here. And a teacher," Kerr said, referring to the mass shooting that occurred at Robb Elementary School in Uvalde, Texas, earlier Tuesday.

"When are we going to do something?" Kerr yelled, slamming his fists on the table. "I'm tired. I am so tired of getting up here and offering condolences to the devastated families that are out there. I am so tired of the, excuse, I am sorry, I am tired of the moments of silence. Enough!"

Kerr has long been outspoken against gun violence. His father was shot dead in a terrorist attack in Beirut in 1984, and he has spent much of his professional life calling for gun law reform.

On numerous occasions, including Tuesday, Kerr has pointed to H.R.8, a bill that would tighten background check rules for firearm transfers among private parties. That bill passed in the U.S. House of Representatives in early 2021, but it never got to the Senate floor.

As he looked into the camera, he continued, "So I ask you: [Senate Minority Leader] Mitch McConnell, I ask all of you senators who refuse to do anything about the violence and school shootings and supermarket shootings. I ask you: Are you going to put your own desire for power ahead of the lives of our children and our elderly and our churchgoers? Because that's what it looks like. It's what we do every week."

Oh, you can see how the liberal media would eat this up. Yet, right after Sandy Hook, local officials did enact an NRA-supported policy of having armed officers at schools. Kerr backed removing those officers from Oakland schools in 2020. Why is that? We don't know because the liberal press never asked him that question at the presser (via NBC Bay Area):

While the NBA mulls over when basketball season can safely begin [season was temporarily suspended due to COVID], Warriors coach Steve Kerr says he’s using his free time to learn about racial issues and on Tuesday, he put his words into actions.

Kerr … joined students and parents in Oakland who are calling for the school district to eliminate its police force.

“This is a real reckoning for much of America, especially white America,” said Kerr as he spoke to the crowd.

He joined dozens of Oakland Unified School district parents and students who are calling for the district to dismantle its internal police force.

“We’re really pushing for a community driven process where parents, teachers, students come to the table and design a collective safety plan,” said Jessica Black, from the Black Organizing Project.

Activists with the Black Organizing Project say the death of George Floyd and the national discussion over racial inequality underscores the moral argument they have been making for nearly a decade.

Kerr, presently being hailed as a hero by left wing sports media, is actually a coward emblematic of many on social media. He has passionate opinions on whatever people are emotional about, even if it directly contradicts his prior emotional opinions.

Regardless, there are many people with many valid opinions on this issue. Steve Kerr is not one of them. He’s a complete hypocrite. Maybe now he’d like to rescind his past support for defunding & removing police from schools. But the fact no media asked him is shameful cowardice.

Look, I like Steve Kerr…in the sports world. The man played with the greatest of all time, Michael Jordan, when he was with the Chicago Bulls. He won five championships in his playing career and has won another three coaching Golden State. He has suffered unimaginable tragedy in his life with his father's murder in the 1980s. The late Malcolm Kerr was serving as the president of the American University of Beirut. That doesn't mean he's totally shielded from criticism or when someone calls out his hypocrisy. School resource officers work. It's proven. Why don't Democrats support that? Well, as you already know, it's not about stopping mass shootings. It's about taking away people's guns.