Elise Stefanik Not Backing Down After Smear from Dems, Media Blaming Her for Buffalo Shooting 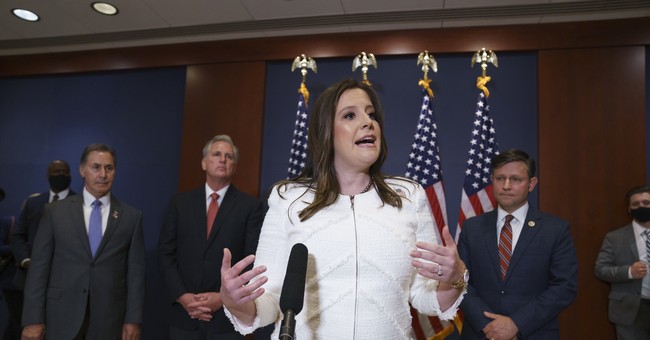 On Saturday, Payton Gendron allegedly shot multiple people at a Tops Friendly Market in a predominantly Black neighborhood in Buffalo, New York, killing 10. Almost immediately afterwards, it was announced that the crime was being investigated as a hate crime, and reports circulated that the suspect had written a racist manifesto.

By Sunday night, the Republican Party was being blamed, with individual members also being targeted in such way, including Rep. Elise Stefanik (R-NY), who has also chaired the House Republican Conference for a year now. "Elise" and "Elise Stefanik" were trending on Twitter for Monday. There were tweets in support of the congresswoman too, though.

Also Greg Sargent—2012 election was “all about demographics,” and moving beyond the “older, whiter, more male version” of America pic.twitter.com/1hiju7GzPi

The mainstream media went after Stefanik as well, especially with The Washington Post. In an opinion column, Greg Sargent wrote about "How Elise Stefanik and the GOP sanitize ‘great replacement’ ugliness." But such a claim made its way into the reporting side of the outlet as well, as Marianna Sotomayor wrote about how "Stefanik echoed racist theory allegedly espoused by Buffalo suspect."

The claims of such racism come from a Facebook ad that ran in September 2021.

"Radical Democrats are planning their most aggressive move yet: a PERMANENT ELECTION INSURRECTION," reads the ad. "Their plan to grant amnesty to 11 MILLION illegal immigrants will overthrow our current electorate and create a permanent liberal majority in Washington," the ad claimed.

It's worth emphasizing that the ad was talking about Democrats' plan in New York City, where illegal immigrants were being allowed to vote, as well as provisions in Build Back Better that would grant amnesty to 11 million illegal immigrants. The ad not only had a focus on border security, it did not mention race replacement at all.

Such criticism is nothing new, though it is finding its way back into headlines when it comes to Democrats and their allies in the mainstream media desperate to blame their political opponents. Stefanik received similar criticism after the ad was released.

Stefanik released a statement over Facebook following the ad's criticism. "To equate opposition to illegal immigration with Nazism and white supremacy is a desperate attempt to stoke outrage & avoid covering Joe Biden’s border crisis," the statement read. While Sotomayor referenced it in her reporting, Sargent did no such thing.

Stefanik released a statement on Monday following being blamed for the tragic shooting. "As a New Yorker, I am praying for the entire community and loved ones," her statement read in part.

The statement also included comments from Senior Adviser Alex DeGrassse, who in the strongest of words denounced such a connection to the shooter's manifesto. "Despite sickening and false reporting, Congresswoman Stefanik has never advocated for any racist position or made a racist statement," he said in part.

"She opposes mass amnesty for illegal immigrants and Joe Biden's wide open border. Like the vast majority of Americans, she opposes giving illegal immigrants the right to vote which NY Democrats support and have made legal in New York City," DeGrasse's statement continued, as a way to bring the focus back to the issue at hand. "She strongly supports legal immigration and is one of the national leaders credited with diversifying the Republican Party through candidate recruitment and messaging.

The statement closed in part by highlighting the border and crime crises under the Biden Administration and assuring that "Congresswoman Stefanik will never stop fighting to secure our borders and secure our elections."

As one of America’s largest and fastest growing non-profits uplifting Hispanic communities, Bienvenido is tired of liberal groups and politicians using honest disagreements over immigration as a political wedge to divide us. pic.twitter.com/nUcGG6lTkr

A Hispanic group, Bienvendio, also denounced the smears against Stefanik. "Acknowledging the fact that liberals use immigration to divide us is not a 'conspiracy theory' nor is it espousing 'replacement theory,' as some have falsely accused Rep. Elise Stefanik of doing," the statement read in part.

In the vicious blame game, the narrative of how the Democratic Party has been openly pushing for illegal immigration is also lost, even as there are open admissions that this will help with their electorate.

This one is from the Center for American Progress. pic.twitter.com/7njk0Ib2Xy

Another liberal think tank over at HuffPo... pic.twitter.com/jAh2Qe7g19

A CAP white paper from April 2013 noted that "Supporting real immigration reform that contains a pathway to citizenship for our nation's 11 million undocumented immigrants is the only way to maintain electoral strength in the future."

A POLITICO report, also from April 2013 noted that "The immigration proposal pending in Congress would transform the nation’s political landscape for a generation or more — pumping as many as 11 million new Hispanic voters into the electorate a decade from now in ways that, if current trends hold, would produce an electoral bonanza for Democrats and cripple Republican prospects in many states they now win easily."

Stefanik is one of the latest to be unfairly blamed for the shooting. "Tucker Carlson" was also trending as a way to blame the TV host. Fox News was even blamed. Not only did the suspect's manifesto not mention Carlson by name, but it actually went after Fox for daring to hire Jewish people.