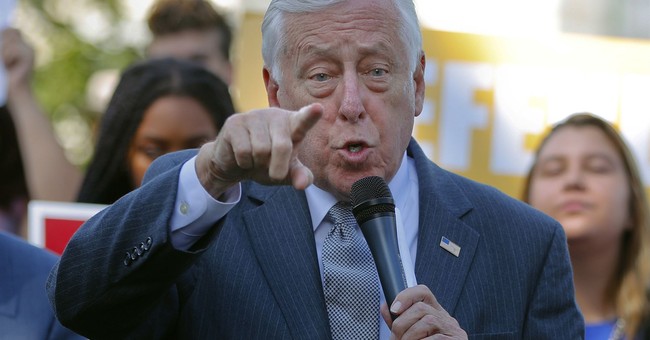 House Majority Leader Steny Hoyer (D-MD) raised some eyebrows when he claimed from the floor of the U.S. House of Representatives that we are "in a time of war" as it pertains to Russia's invasion of Ukraine.

"Mr. Speaker, it is unfortunate, that in a time of war, we spend all our time blaming our own president. It is unfortunate that the Europeans put themselves over the objections of numerous administrations, in a place where they had dependence on Russia," he said, in a clip uploaded by Greg Price. "Russia has no leverage over us, the majority leader went on to claim, we don't need Russia for energy. As a matter of fact, we voted overwhelmingly, stop buying any petroleum products from Russia, which I supported strongly."

It's quite the claim to make that we are "in a time of war," when we are not. President Joe Biden himself has assured the American people that there will not be boots on the ground with Russia.

Our friends at Twitchy picked up on the clip and mocked Hoyer's focus for how "unfortunate" he thinks it is when it comes to how the president has been treated on the issue.

The Biden administration itself has blamed many of the country's issues, such as inflation and high gas prices, on Russia's Vladimir Putin, despite these issues occurring even before the invasion in late February. It would appear Hoyer is toying the party line, then.

A fellow House member, Rep. Chip Roy (R-TX), was one of those to remind that Congress had made no such declaration of war, as did Rep. Thomas Massie (R-KY).

“In a time of war.” - did we vote on a declaration of war? Asking for a friend. https://t.co/ACgMx3fKnp

I didn’t know we were at war…did congress make this declaration?

Trying to find the house vote where you declared war. Perhaps Rep Hoyer can point that out to me.

When did Congress vote on a declaration of war? https://t.co/v2gCfhAbfb

During Friday's press conference, when asked about Hoyer's remarks, outgoing White House Press Secretary Jen Psaki said she "did not see the full context of those comments," and said "obviously, the U.S. has a stake in" with the amount of assistance.

Jen Psaki is asked about House Majority Leader Steny Hoyer claiming that we are in "a time of war":

Psaki notes that Americans should be praised for "their support of this war." pic.twitter.com/pJUHfGYwRZ

As a result, "Steny Hoyer" has been trending on Twitter for Friday afternoon.

Curiously, this is not the first time that Majority Leader Hoyer has claimed we are at war. He did so in March as well, as I covered at the time.