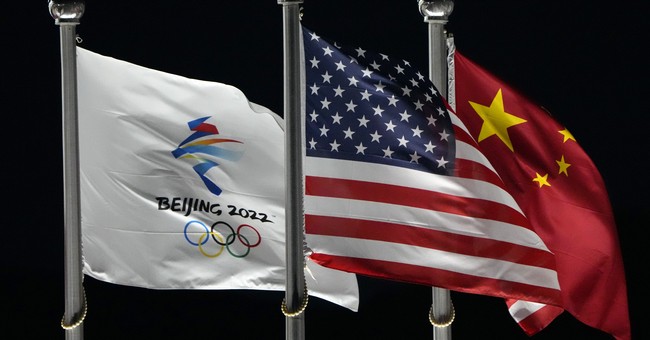 The Beijing Winter Olympics have been on for over a week now. Also known as the Genocide Games or Genocide Olympics, they've been going about as poorly as you'd expect. As I highlighted last Sunday, the Friday Opening Ceremony ratings were at an all-time low. And the overall ratings are down significantly from the 2018 Winter Games when they were played in PyeongChang. NBC has now addressed the poor showings. How could the network not? They've spun it and dismissed it in a way that one almost wished they hadn't, though.

"For us, it’s been difficult. There’s no way around this," NBC Sports chairman Pete Bevacqua admitted in an interview with The Hollywood Reporter that was published on Friday. He otherwise largely dismissed them, though. "The fact that we’ve been able to bring these Games to life during a pandemic with only a six-month window between the two [Olympics], the ratings are — of course we always want to have the ratings better — but the ratings for these Games, as I said, are about where we thought they’d be," he also said.

Bevacqua did mention the pandemic as well. "It’s no secret that athletes in masks, venues without spectators, so much of the passion and excitement, those great moments of Olympic athletes hugging their family and friends and spouses and partners, so much of that magic is just out of necessity not present."

What he left out though was that the Olympics are occurring in a Communist nation that unleashed the Wuhan coronavirus on the world in the first place necessitating athletes to wear masks and to perform in venues without spectators.

The discussion did touch upon China, which has committed a litany of human rights abuses, making it the first Games to take place where there is an active genocide being carried out at the time. It's so piss-poor, this is the part you almost wished they didn't bother:

Meanwhile, Molly Solomon, the executive producer of NBC’s Olympics coverage, said she was “incredibly proud” of how they handled the challenges of discussing China’s human rights abuses, and other geopolitical issues, during the broadcasts. Specifically, China’s selection of an Uyghur athlete, Dinigeer Yilamujiang, to light the Olympic torch, was a shocking moment during the opening ceremony.

They actually see it as something to be proud of.

And then there's the addressing of how Savannah Guthrie practically served as a propagandist for the Chinese Communist Party and Xi Xinping. She did "an extraordinary job," as NBC saw it though:

“Going in, we promised ourselves, and we thought it was essential for the viewers, to provide perspective on China’s complicated relationship with the rest of the world,” Solomon said. “Imagine in the moments when we found out that the cauldron lighter was from Xinjiang, and kudos to Mike Tirico and Savannah Guthrie, to frame that moment, to connect it to all the other perspective we had provided throughout that ceremony. That’s real-time television, a live opening ceremony, and I thought they did an extraordinary job of presenting that moment.”

“I think we tried to make a very fine delineation between becoming a public affairs broadcast and how did it impact the Olympics, and certainly where we were and who was there mattered,” Tirico said. “That’s why Molly and Pete both thought it was really important that I was physically there for the opening ceremony, and I’m so glad I was. Xi Jinping and Vladimir Putin were 25 yards away in the stadium. You could just get a sense of the history of the moment by being there.”

To recap, Guthrie had stated Jinping's decision to choose an Uyghur athlete to co-light the Olympic flame was "quite provocative," "a statement" and "an in-your-face response to those Western nations, including the U.S., who have called this Chinese treatment of that group genocide and diplomatically boycotted these games."

If NBC Executive Producer Molly Soloman was "incredibly proud" and thought Guthrie "did an extraordinary job," it's worth wondering why Twitter was allowed to censor Mediatie's Jackson Richman's clip of Guthrie's commentary that vent viral.

"By Saturday, the 20-year-old cross-country skier, Dinigeer Yilamujiang, had given the slip to an eager global press, her lackluster finish in her Olympic debut barely mentioned in the Chinese media," Liza Lin and Elaine Yu later reported for The Wall Street Journal.

NBC is hopeful in looking ahead to the 2024 Olympic Games and beyond, as well as how the viewership did over their streaming service, Peacock.