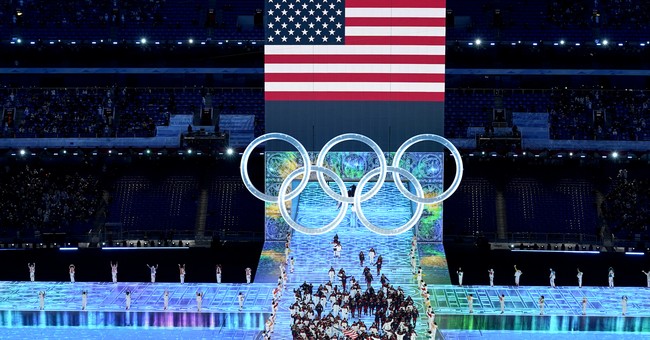 Some good news out of the attention surrounding the Beijing Winter Olympic Games is that the Opening Ceremony from Friday drew record-low ratings. The reasons should be obvious, stemming first and foremost from how it's occurring in a county where genocide is taking place. These games have been dubbed names such as Genocide Games and Genocide Olympics.

When it comes to the actual numbers, Dan Wetzel explained in his column for Yahoo! Sports that just 16 million tuned in for the Opening Ceremony. This new record low isn't even close, as the previous record was 20.1 million for the 1988 games in Calgary. The last Winter Games in 2018 held in PyeongChang had 28.3 million viewers.

One should hardly need to ask, but Wetzel at least quickly enough acknowledges that it's to do with how these Games are taking place in China. At first, he is careful to point out that it's something "they say" when it comes to why countries are staging a diplomatic boycott. He writes:

The host country, China, is a serious problem.

Numerous countries, including the United States, are staging a “diplomatic boycott” of these Games due to what they say is China’s active campaign of genocide against the Uyghurs, a minority ethic [sic] group of mostly Muslims in the far northwest part of the country.

He does, at least, go on to criticize the Opening Ceremony itself:

Friday’s Opening Ceremony from the famed Bird’s Nest in Beijing was scaled back (just over two hours) and rich with politics and propaganda, including a speech from International Olympic Committee (IOC) president Thomas Bach that might as well have been written by the Chinese Communist Party.

It ended with China using cross country skier Dinigeer Yilamujiang, who the state run media said has Uyghur heritage, as one of the cauldron lighters. It was a clear counter to the claims of genocide — see, look at this smiling, celebrated Uyghur.

It was a disturbing and dispiriting moment, a young athlete and an iconic moment in every Olympics used as a propaganda prop to cover up a campaign of slavery, torture, forced abortions and internment in reeducation camps. It did nothing to build good feelings toward the competition.

As such, rather than a celebration, this feels, and looks, like a grind of hardship, isolation and suspicion.

Unfortunately, that propaganda isn't just coming from the International Olympic Committee (IOC), which allowed the Games to take place in Beijing in the first place. As I highlighted on Friday, NBC's Savannah Guthrie referred to Yilamujiang being chosen for such a role as "quite provocative" and "an in-your-face response to those Western nations, including the U.S., who have called this Chinese treatment of that group genocide and diplomatically boycotted these game."

The propaganda continued in a write-up from NBC News about the selection of Yilamujiang.

NBC also refused to air an ad from Rep. Mike Waltz (R-FL) with a message from himself and Enes Kanter Freedom of "when you see made in China, put it down."

NBC refused to air my Olympics ad with @EnesFreedom unless we censor U.S. corporate logos of the Genocide Games sponsors.

We won’t let them silence us.

Here’s the ad that NBC and the Chinese Communist Party doesn’t want you to see ?? pic.twitter.com/0y35Z6KdZC

People also already watched, or rather, didn't watch the Tokyo Olympics just last summer, which were supposed to take place in 2020 but had been postponed due to the Wuhan coronavirus. Such is another ridiculous reason for China to be the host country, after a virus that has killed millions originated there.

As China is going for a "Zero COVID" policy, the fate for those who happen to test positive for the virus is to be quarantined in isolation with poor living conditions with bad food and no equipment.