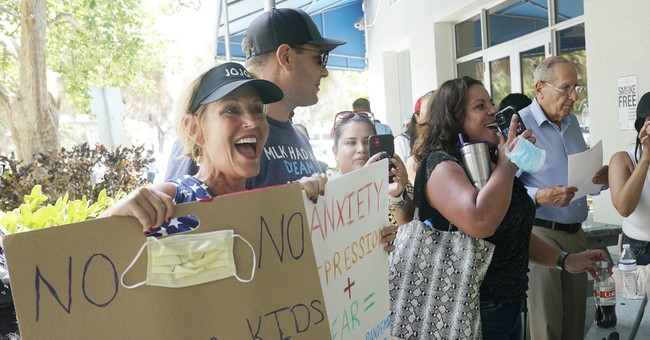 On Tuesday, Carrie Lukas showed up to Forestville Elementary School with her two young children, ages 9 and 7, unmasked. The school is located in the Fairfax County Public School system, the largest district in Virginia and one of the largest in the country. Despite Gov. Glenn Youngkin's executive order leaving the decision of whether children should be masked up to parents, Lukas' children were sent home and suspended. Further, the school's security officer called the police to shoo away a handful of other parents who had gathered, and Luke Rosiak, a reporter for The Daily Wire, whose child will be eligible for that school next year.

Carrie Lukas tried to take her kids to their Fairfax school without masks, pursuant to a state order

Officials blocked them at the door. 3 police cars soon arrived

Lukas and her newly delinquent kids headed to a diner for pancakes and a lesson on civicshttps://t.co/7dacFGaRwr

“FCPS decided to treat us as though we were going to be violent criminals... had a security guard and press person and really were trying to make it as uncomfortable as possible for us to exercise... our 1A rights to come and have this polite exchange with our children’s schools”

FCPS isn't a school system, it's a political organization that operates primarily to serve its staff (or their union) and despises its customers. pic.twitter.com/cQUQAsOmhs

Lukas, who spoke to Townhall about the experience, explained that school had also been made aware the night before by her. She explained she let them know "I was going to be exercising my rights" and understood her children might be suspended. Lukas emphasized in our conversation that she likes her school, and has no ill will towards them, but shared "I'm frustrated with Fairfax County Public Schools, I think it's important to make my views known."

Pursuant to Governor Glenn Youngkin’s Executive Order 2, Virginia parents should feel empowered to exercise their rights and opt our children out of the mandatory mask policy.

Sign our letter to let school leaders know how you feel. #UnmaskVAhttps://t.co/EHrjQg1VQw

The suspension is consistent with news from last Friday that students in the school system who did not wear masks would be disciplined in such a way, though a text message sent to families attempted to do damage control that same night.

A point Lukas emphasized throughout is that she had a nice conversation with the assistant vice principal, who did not want to suspend her children and tried to do so as nicely as possible. However, Lukas also emphasized that the behavior from the security guard, who is not normally at the school, seemed "really aggressive."

Rosiak was also there to witness and film the exchange, but because he and the other parents were being treated so harshly and aggressively by the security guard, it became an even bigger deal than was likely necessary. Lukas referred to the matter of the security guard calling the police as "tremendous overkill."

Not only was a security guard present that day, which is out of the norm, but so was a press person, both of whom were sent by the school system to handle the exchange and try to block coverage of it. "Had they sat there and treated us like I was trying to treat them, it would kind of have been a non-story," Lukas shared.

She would go on to respond, when asked by Townhall, that the school "definitely did not want press to witness this."

It was the lack of trust that Lukas perceived existed, which she said bothered her the most, considering that the school system is the one breaking the law.

Rosiak was treated as if he were part of the paparazzi or a criminal. Even if there were more parents there, though, and had brought signs, Lukas went on to question why it would be an issue.

"Heaven forbid we had had people who showed a sign, what would have been so terrible about that," Lukas wondered. "It's just the extent of having this absolute 'you must comply and how dare you question us.' That's the thing, it was like they were so outraged that one of us might possibly push back on their authority, when in my mind, I think they're completely in the wrong. They're completely disobeying our duly elected governor's executive order just for political reasons. It's completely senseless."

Lukas' children are back in the classroom, masked, as she does not want them to miss a lot of school, she shared. When asked what the motivation behind Tuesday was, she spoke to being a voice for other parents, and even teachers, in the district, who feared being ostracized and who did not have such jobs where they knew they had the backup that Lukas has.

"I thought it was important for them to have to show the consequences of their decision," Lukas shared, referring to the school. "I think they were hoping parents would just comply and nobody would push back." Lukas went out to call out the school as well. "They denied my kids educational services, based on their decision not to follow this executive order." Lukas explained that she put it in legal terms in a letter that she suffered a harm with such a loss.

"I think it's important that they had to do that so that they know that there are aggrieved parents like me who know they have potentially actionable claims against them. I wanted them to know."

As Landon reported on Monday, Fairfax is one of seven boards in the commonwealth to sue Gov. Youngkin, with those districts asking for an immediate injunction on the order.

At issue, according to the school boards, is whether the governor's executive order can override the local school board's authority. Youngkin, however, as has Attorney General Jason Miyares, have framed the issue as parents having authority over their children.

Lukas will be attending a school board meeting on Thursday night she shared.