ICYMI: Joe Biden's Happy New Year Messages Were a Swing and a Miss 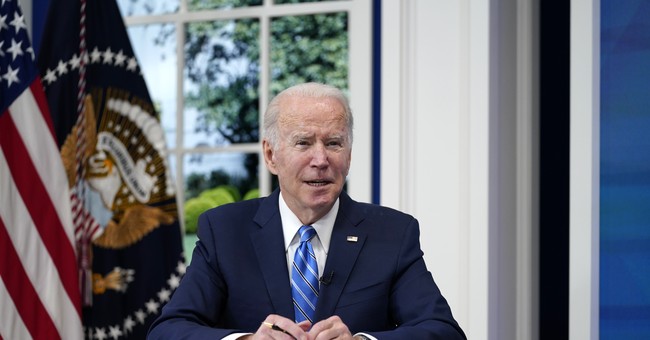 As 2021 came to a close, President Joe Biden tweeted out video messages about the end of the year and the beginning of the new one. And they were about what you'd expect.

Biden's video message from December 31 claimed that "we're persevering, we're recovering, back to work, back to school, back to joy," which he called "extraordinary" and said "that's how we made it through this year and how we'll embrace the next, together."

One particular point worth taking issue with is Biden saying children are going "back to school," as the number of schools closing for the more contagious but also more mild Omicron variant is now at 2,181, according to the Burbio tracker. Biden's own Education Secretary Miguel Cardona even went on to acknowledge during his "Fox News Sunday" appearance that there will be "bumps in the road."

The president's account issued another video on January 1, which, as a warning, is not so much a message as it is a dizzying rehash of some moments throughout Biden's first year in office. While the collection of moments was a bit random, there was predictably a focus on encouraging Americans to get vaccinated, including with a message from pop singer Olivia Rodrigo.

As I reflect on 2021, I’ve never been more optimistic about the future of this country. With hope and unity, let us come together and build on our progress in the year ahead. pic.twitter.com/ntjb3PAvdf

The tweet did include a bit of a message, though, which is perhaps the most delusional part of all, especially when Biden claims that he's "never been more optimistic about the future of this country."

Further, for how much the president loves to talk about "unity," polls show that the American people are not as confident or hopeful as he is in that regard that he can bring people together. The country is also particularly divided along partisan lines, and a plurality even believe the country is headed for a civil war.

That poll wasn't the only one.

According to a Rasmussen Reports poll from December 26, many Americans think 2021 was one of the worst years yet. A plurality, at 48 percent, give 2021 a poor rating.

58% of Americans say you were one of the worst years in U.S. historyhttps://t.co/1V0fjA0jzw pic.twitter.com/2DhtGgNc8I

A YouGovAmerica poll from December 17-20 also found that 58 percent of Americans believe 2021 was "one of the worst years in U.S. history." Even a plurality of Democrats, at 43 percent, said so. The poll also asked respondents about 2022, and the numbers weren't so hot there, either. Twenty-four percent think it will be "bad" for the country, while 23 percent say it will be "terrible."

Biden may claim to be "optimistic" about the coming years, but he's one of the few.