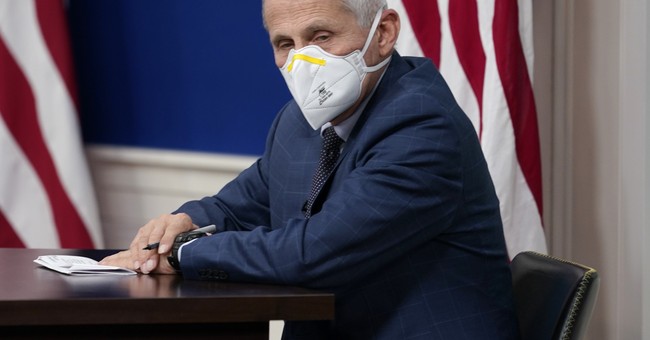 Dr. Anthony Fauci just had a birthday on December 24, but he's in no rush to retire. The 81-year-old is already the highest-paid employee in the federal government, with a salary of $434,312 in 2020. And, as Adam Andrzejewski reported for Forbes, Fauci's pension would also be the highest in the history of the federal government. Forbes calculated that he would make $347,500 a year for his pension. He's also eligible for annuities.

Federal employees with Fauci’s length of service can retire to earn “80 percent of [their] high-3 average salary, plus credit for [their] sick leave,” according to the U.S. Office of Personnel Management.

Additionally, Dr. Fauci is likely eligible for an annuity, paid out by the federal government. After serving 10 years, federal employees are eligible for “2 percent of [their] high-3 average salary for each year.” Dr. Fauci has more than surpassed the 10-year-minimum work requirement, and if he retired last year he could have drawn down at least an extra $8,344 a year (($1,251,545/3) x 2% = $8,344). If he leaves at the end of this month, that figure is likely closer to $8,575 a year in annuity payments, assuming his salary did not go down in 2021.

Fauci is in no rush to retire, though, and plans to remain at his post through the end of the pandemic. It didn't help that his ego was further inflated by Jonathan Karl during his December 19 segment on ABC's "This Week."

Karl emphasized that he saw Fauci as "the hardest working person," and asked him "do you feel a responsibility to stay doing what you're doing until this -- until this has truly gotten under control?"

"Absolutely," Fauci responded. "There's no doubt about it. This is the thing that I do. This is what I’ve been trained and experienced in doing my entire professional life. There's no way I’m going to walk away from this until we get this under control. I mean, that's the purpose of what we do. That's -- that's our mission in life. In the middle of it, I’m not going to walk away."

He also likened it to World War II. "You know, we're in a war, Jon. It's kind of like we're halfway through World War II, and you decide, well, I think I’ve had enough of this. I’m walking away." Fauci emphasized "you can't do that" and "you've got to finish it," offering a claim of how "we're going to finish this and get back to normal."

It's not quite "I represent science," but it's close, and it does indicate a pattern.

Last month, during an interview with CBS' Ted Koppel, Fauci had also mentioned that he's "going to keep doing that until this COVID-19 outbreak is in the rearview mirror, regardless of what anybody says about me, or wants to lie and create crazy fabrications because of political motivations."

Such comments came up again, during another CBS interview with Margaret Brennan on November 28. "Rearview mirror looks like when you and I are talking some time on an interview whenever, and we're talking about something else and that COVID is not dominating the economy, the mental framework of our society," he responded. "Dominating our fear of being safe for ourselves and our children. That's what it means in the rearview mirror. Not that we've accepted something that's still terrible, but that it's so low that we can start thinking about other things that are much more important."

Fauci has made quite the amount of Sunday show appearances. The goalposts keep moving. We don't see signs from him or the powers that be that they know what they're doing or when it will end.

The headline of a previous report from Andrzejewski, in October, which highlighted the 2020 salary, noted that "Dr. Anthony Fauci Received Big Pay Increase To Prevent Pandemics." His reporting mentions that "Justification for the funding centered around trying to prevent the next pandemic and preventing a possible spillover of viruses from nature to humans."

As we've covered at Townhall, Fauci's activity has arguably led to making a pandemic more likely when it comes to his penchant for gain-of-function research. He even indicated in a previous column for The Washington Post that such research was worth a potential pandemic.

Dr. Fauci has gone on to lie about gain-of-function research, as Sen. Rand Paul (R-KY), in particular, has uncovered.