'Contaminated': Doctor Blasts Fauci's 'Elitist' Claim That Criticizing Him Is Somehow an Attack on Science 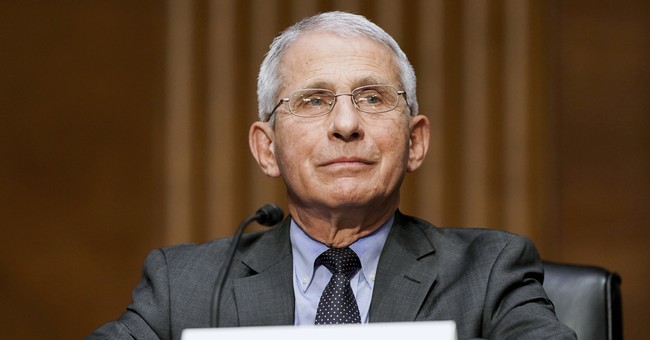 Just so we're clear, Dr. Anthony Fauci's "I represent science" comments this week were not an outlier or a slip of the tongue. He said almost the exact same thing back in June. He really believes it, or he's at least convinced himself that he is the personification of Science and Truth – and therefore beyond reproach. Here was his astonishingly arrogant statement at the time:

“Attacks on me, quite frankly, are attacks on science,” Fauci said Wednesday. “All of the things I have spoken about, consistently, from the very beginning, have been fundamentally based on science. Sometimes those things were inconvenient truths for people.”

It’s easy to criticize, but they’re really criticizing science because I represent science. That’s dangerous. To me, that’s more dangerous than the slings and the arrows that get thrown at me. I’m not going to be around here forever, but science is going to be here forever. And if you damage science, you are doing something very detrimental to society long after I leave.

Let's set aside, for the moment, the monumental self-regard that's required to equate yourself with science itself. Fauci's problem is that he has not always made public statements that are "fundamentally based on science," by his own admission. He told a white lie to the public regarding masks early in the pandemic, and he doesn't regret it. It was for the greater good, he says:

Dr. Anthony Fauci said Friday the reason the public was advised not to wear masks at the beginning of the coronavirus pandemic was that there were too few to go around...Fauci explained the early advice against masks by saying: "The public-health community — and many people were saying this — were concerned that it was at a time when personal protective equipment, including the N95 masks and the surgical masks, were in very short supply."

Advising people not to rush out and buy masks because society needed to prioritize masks for healthcare workers would have been honest. Advising people not to wear masks, later explaining that this guidance was wrong but sort of for their own good at the time, is less honest. And it's not "fundamentally based on science." Similarly, Fauci deployed what he felt was a noble lie on herd immunity, too:

In a telephone interview the next day, Dr. Fauci acknowledged that he had slowly but deliberately been moving the goal posts. He is doing so, he said, partly based on new science, and partly on his gut feeling that the country is finally ready to hear what he really thinks. Hard as it may be to hear, he said, he believes that it may take close to 90 percent immunity to bring the virus to a halt — almost as much as is needed to stop a measles outbreak… “When polls said only about half of all Americans would take a vaccine, I was saying herd immunity would take 70 to 75 percent,” Dr. Fauci said. “Then, when newer surveys said 60 percent or more would take it, I thought, ‘I can nudge this up a bit,’ so I went to 80, 85.”

His "gut feeling" about what the country is "ready to hear" is not "fundamentally based on science." Nor is his shocking naivety on China, exhibited several times – not to mention his (at best premature) efforts to knock down the lab leak theory, for which he was thanked by an ally who appears to be knee-deep in the gain of function research scandal. He's an ineffective messenger and has been for quite some time. Yet he's all over television, constantly, to the point that people might be forgiven for wondering what else he does. And he has now stated on multiple occasions that criticizing any of this is tantamount to an assault on the institution of science, or whatever. I asked Dr. Manny Alvarez about Fauci's standard, and he went off:

Snippet from the longer interview pic.twitter.com/mMkpTENxft

"This kind of elitist behavior is what what what health care has been fighting for the last 15 years. The consensus of science is not based on one person, it’s based among many people. There are a lot of people that contributed to the discovery of science due to the interpretation of science scientific data. It takes, you know, it takes a lot of people. So when you have one person say, you know, you know, it’s like going into a patient’s room and you and you trying to say something to a patient and you say, Well, you just trust me, I’m the doctor. I know what’s best. That is that that kind of behavior is what we teach our medical students not to do, because it is not that even the patient has the right to ask questions. Even the patient has the right to say, I know my own body. Can we think about whether this treatment is the best for me?”...He doesn’t represent science as an absolute power. And I think that just, you know, the politics of Fauci are so contaminated that it really doesn’t just, you know, it doesn’t do any justice for this country whatsoever.”

Alvarez added that if he adopted a Faucian "don't question me" attitude with patients, he could be reported internally at his hospital. I'll leave you with a few more thoughts in a very pointed column from Piers Morgan:

He sounds more like a religious leader berating non-believers than a scientist trying to grapple with a pandemic that has seen more scientific flip-flopping than any global medical crisis in my lifetime. The parallel is apt because the more he's been attacked, the more self-righteous, zealous and preachy Fauci has grown...Now aged 80, and said to be 'exhausted' after working every day for the past 20 months, he's showing signs of a stubborn, irascible resistance to any challenge to his, often contradictory, pronouncements that is now doing more harm than good. The problem with Fauci saying he IS the Science is that so often in the pandemic, he's got the science plain wrong...Bottom line: if you want the American people to trust you, it's not a good idea to accuse elected representatives of half the country of being lying crooks, however much you've been provoked. With his arrogant partisan performances this weekend, Fauci's laid bare the inherent weakness of his obsession with going on TV. The more he talks, the less many Americans either like or believe him. They just see a narcissistic blow-hard who likes the sound of his own voice and constantly changes his mind...If, as he insists, his only interest is in saving lives, then it's time Anthony Fauci put his ego away, stayed off TV and shut the f*ck up.

What a brutal broadside against Science Himself.