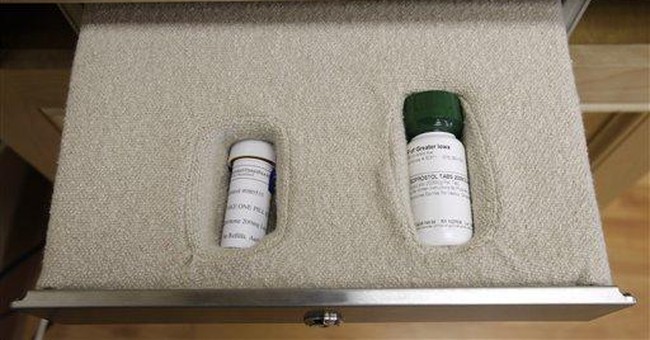 Last Thursday, the Food and Drug Administration (FDA) permanently did away with requiring women to have an in-person visit to acquire drugs for a chemical abortion. Pro-lifers immediately spoke out against this, as the chemical abortion method is a particularly dangerous one. It turns out that such concerns are warranted.

As Patrick Hauf reported for The Washington Free Beacon on Thursday, "FDA Used Incomplete Data To Justify Deregulation of Chemical Abortion Pills, Studies Show," which entailed failure to properly look to the accurate number of medical emergencies following this method.

Hauf mentioned in his reporting:

The reporting system relies on data submitted by the makers of chemical abortion pills, who in turn gather data from doctors who prescribe the drugs. And a new study published this week shows the FDA reports a fraction of the data it is required to collect. Three board-certified OB-GYNs found that adverse effects reported by Planned Parenthood did not show up in the FDA database. In 2009 and 2010, for example, Planned Parenthood reported 1,530 adverse events in women who received mifepristone. The doctors found the FDA database for that time period only showed 664 complications.

Last month, as I covered, the Charlotte Lozier (CLI) Institute released a peer reviewed journal that showed emergency room visits went up 507 percent between 2002 and 2015 following this method, and that 60 percent of visits were incorrectly attributed to miscarriages.

Such efforts to mislead women about this method look to be a pattern, not merely from the federal government, but from abortion advocates.

This particularly applies to Dr. Daniel Grossman, a professor of Obstetrics, Gynecology and Reproductive Sciences at the University of California, San Francisco. As Carole Novielli, a researcher and writer for Live Action News has extensively covered, he has advocated for even more availability of these drugs.

NBC failed to note Grossman's potential conflicts of interest. NBC is not about truth - not about scrutinizing anything - they are propogandists for abortion plain and simple. #Think #Abortion pic.twitter.com/izWcUWsidn

Dr. Grossman has published such gut-wrenching material before. In October, he tweeted a lengthy thread referring to this method as "wonderful" and "great" and "very phenomenal." He also included an opinion piece of his back from 2018 published in The Los Angeles Times where he advocated for having these dangerous abortion-inducing drugs available in one's medicine cabinet and compared them to "having Tylenol in the cabinet for a headache, cramps, or painful injury."

For several years, I have been an advocate of advance provision, which means people have abortion pills on hand in case they need them, like having Tylenol in the cabinet for a headache, cramps, or painful injury.

Dr. Grossman is also pro-abortion to the point of encouraging the falsification of medical records. On December 15, shortly before the FDA announced its decision, Novielli wrote a piece for Live Action News, "ER doctors should falsify records to hide abortion pill complications in a post-Roe era, suggests media’s favorite abortionist."

The suggestion from Grossman comes from a piece by the particularly pro-abortion Amanda Marcotte in Salon. "When SCOTUS guts Roe: The covert plan to provide abortion pills on demand – and avoid prosecution," her headline read.

Grossman is mentioned throughout:

Unlike in the pre-Roe days, when getting a safe abortion meant finding someone who could physically perform it, now pills can be used in the privacy of one's own home. As Dr. Daniel Grossman of the University of California at San Francisco told Salon, "online sites that are making the pills available" with "accurate information" and "good quality medication" allow for self-managed abortion to "be very safe and effective..."

"We need to talk about it because a whole lot of people are going to need to have illegal abortions," [Amelia Bonow of Shout Your Abortion] noted. Indeed, all prevailing evidence shows that banning abortion does little to actually stop it. On the contrary, countries that ban abortion tend to have higher abortion rates than countries where it is legal. Her hope is that activists can fight "to make sure that you get what you need and evade criminalization in the process."

Doctors have a role to play in this. On Twitter, Dr. Grossman floated the idea of doctors providing advance provision of pills, in response to sex advice columnist Dan Savage suggesting stockpiling. "Advance provision of abortion pills before you need them makes a lot of sense," he wrote. "Mifepristone has a shelf life of about 5 years, and misoprostol has a shelf life of about 2 years."

As Grossman explained to Salon, some doctors already do this for patients who are traveling overseas for a long time, especially in places where the law or lack of resources makes the pills hard to get in a pinch. California has already moved to enhance patient confidentiality protections in anticipation of patients who obtain pills in their state for use in one where abortion is banned.

Marcotte is not alone in calling for people to flaunt the law to acquire these drugs if and when it comes to that. In July I covered how POLITICO published a similar piece.

A woman first takes mifepristone, which starves her unborn child of nutrients. Then, 24-48 hours later, she takes misoprostol to cause contractions to expel the dead child.

This method carries with it four times the complications of surgical abortions. Side effects and risks associated include abdominal pain, nausea, vomiting, diarrhea, weakness, fever/chills, and headaches. The bleeding may last for weeks.

Some studies have found 10 percent of women face incomplete abortions at 9 weeks gestation. This can lead to death from infection if the remaining fetal parts or tissue are not properly removed.

One can watch a scene from "Unplanned" which shows this method, via the This is Chemical Abortion website.

The Senate has yet to confirm an FDA commissioner, though Robert Califf, who previously served in the role under Barack Obama, is currently under consideration.

Sen. Mike Braun (R-IN) during a hearing earlier this month asked Califf if he would follow the latest data and science on this issue. While Califf indicated he is not involved in this reevaluation, he claimed to "assure" the senator that "the staff will be looking at the latest data and applying the best science and make the best possible decision."

Thank you @SenatorBraun for asking FDA Commissioner nominee Robert Califf if he will follow the latest data and science to protect women and girls from the risks of dangerous chemical abortion drugs pic.twitter.com/iVwJrg2JFf

We now know that this does no appear to be the case.