Steve Bannon to Plead Not Guilty to Contempt of Congress Charges 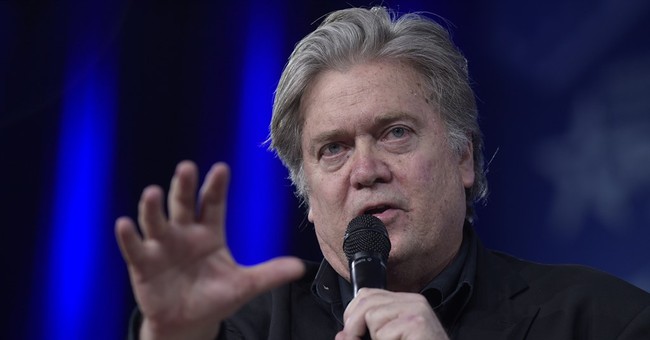 Steve Bannon is expected to plead not guilty to contempt of Congress charges he was indicted by a federal grand jury on Friday. As Rebecca Beitsch and Harper Neidig reported for The Hill, Bannon's lawyers filed a motion on Wednesday for him to enter the plea and skip his arraignment, which was scheduled for tomorrow, though the judge needs to sign off. This news comes after Bannon had told reporters on Monday, as he turned himself into federal authorities, that "this is going to be the misdemeanor from hell" and "we're going on the offense."

As I noted in my report on Friday, Bannon, if found guilty, could receive up to one year in jail for each charge, as well as a fine ranging from $100 to $100,000 for each charge. Bannon has been charged with two counts, one for failing to appear for an October 14 deposition before the January 6 select committee and another for failing to provide documents.

Not long after he refused to comply, the House voted in a bipartisan fashion to find Bannon in contempt.

Bannon was among the first key figures subpoenaed by the committee, back in September. Through a lawyer, former President Donald Trump told subpoenaed figures not to comply, citing executive and other privileges. Trump is going through his own legal path when it comes to delaying records from his White House being received by the committee.

Last Thursday night, the U.S. Circuit Court of Appeals for the District of Columbia temporarily blocked the committee from receiving the records. Oral arguments will take place on November 30.

A June 11, 2019 report from the Pew Research Center, citing the Administrative Office of the U.S. Courts, pointed out that in 2018, 90 percent of federal criminal defendants pleaded guilty.

For 2018, "only 320 of 79,704 total federal defendants – fewer than 1% – went to trial and won their cases, at least in the form of an acquittal, according to the Administrative Office of the U.S. Courts," the report noted.

STEVE BANNON: "I'm never going to back down and they took on the wrong guy this time." pic.twitter.com/rba92rV7Y3