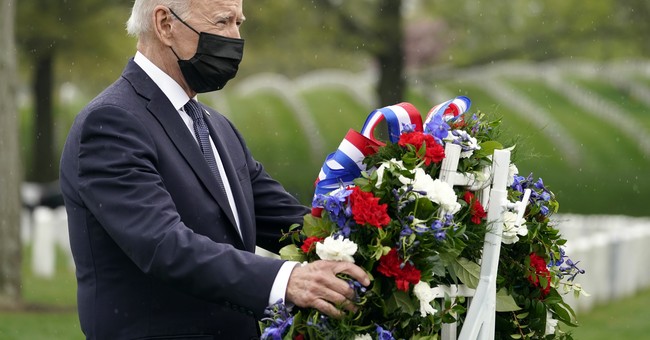 On Friday, President Joe Biden released his video remarks about 9/11 on his official Twitter account, which lasted just over six minutes.

20 years after September 11, 2001, we commemorate the 2,977 lives we lost and honor those who risked and gave their lives. As we saw in the days that followed, unity is our greatest strength. It’s what makes us who we are — and we can’t forget that. pic.twitter.com/WysK8m3LAb

The president used the end of his speech to promote "unity," calling to mind how Americans came together in the aftermath of 9/11. "In the days that followed September 11, 2001, we saw heroism everywhere, in places expected and unexpected," Biden pointed out, before making an admittance about unity with how he framed it.

"We also saw something all too rare," he went on to say, which was revealed to be "a true sense of national unity. Unity and resilience, the capacity to recover and repair in the face of trauma. Unity and service, the 9/11 generation stepping up to serve and protect in the face of terror, to get those terrorists who were responsible, to show everyone seeking to do harm to America that we will hunt you down and we will make you pay. That will never stop, today, tomorrow, ever, from protecting America."

He also spoke of how people had acted against each other, though, specifically Muslims, pointing out that "yet we also witnessed the darker forces of human nature" of "fear and anger, resentment and violence against Muslim Americans, true and faithful followers of a peaceful religion."

Biden went on to say that "we saw a national unity bend. We learned that unity is the one thing that must never break. Unity is what makes us who we are, America at its best." The president called that "the central lesson of September 11th," which is "that at our most vulnerable, in the push and pull of all that makes us human, in the battle for the soul of America unity is our greatest strength."

"Unity doesn't mean awe have to believe the same thing," he said, "but we must have a fundamental respect and faith in each other and in this nation. We are unique in the history of the world because we're the only nation based on an idea, an idea that everyone is created equal. and should be treated equally throughout their lives."

Biden called this unity "the task before us," which is "to once again lead not just by the example of our power, but by the power of our example."

The president closed in part with expressing "hope" for this, especially when it comes to a future that is "not a reactionary one or one based on fear, but a future of promise, strength, and grace, worthy of their dreams and sacrifice" when it comes to those who lost their lives 20 years ago on September 11.

This is hardly the only time Biden's spoken of unity, which he's done not only as president, but as a candidate and as president-elect. He had memorably offered himself as a unity candidate, and pledged at his inauguration to be "a president for all Americans."

The America we live in today though is particularly partisan, with many of Biden's presidency thus far having been polarized, from cabinet nominees to executive actions, to policy positions and mandates.