The Deep Friendship Between Bill Clinton and Terry McAuliffe Continues 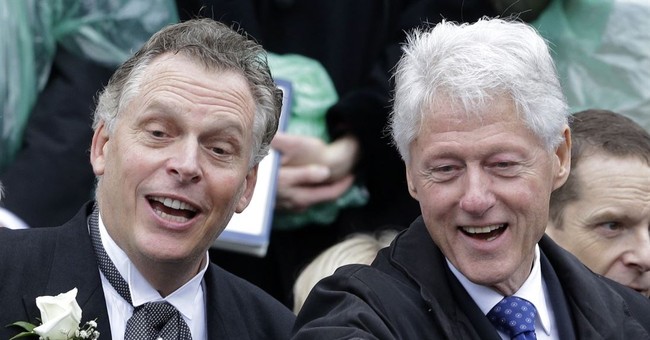 Former President Bill Clinton fundraised with Virginia gubernatorial nominee Terry McAuliffe, a fellow Democrat in upstate New York where together the two raised $425,000 during a six hour visit in Skaneateles, according to Syracuse.com. The connection between Clinton and McAuliffe, who served as governor of Virginia from 2014-2018 and is running again in 2021, goes back decades. Sally McAuliffe shared photos of herself and her father at the event on her Facebook page.

The Virginia GOP highlighted that connection in an ad which was also released on Thursday, using clips and statements from McAuliffe himself.

"I go back with President Clinton and Hillary 'til 1980," he says at one point. "We've vacationed together for years… we're best friends" he says, also sharing that they've been "best friends for a long time."

McAuliffe served as the finance director of the Bill Clinton re-election campaign in 1996 and was the national chairman of Hillary Clinton's 2008 presidential campaign.

There's a clip of McAuliffe speaking at an event where he refers to Clinton as "a great president" and says they talk "a couple of times a week."

There's another connection though, with sexual predator Jeffrey Epstein. The ad also includes clips of coverage of Epstein from 2019, including how Clinton was known to have traveled with Epstein. News clips remind voters how "we know Bill Clinton's been on Epstein's plane" and that "Bill Clinton... flew on his private jet many times, including to his private island."

Interspersed with clips of such coverage is a clip of McAuliffe sharing that "I've traveled with Bill Clinton all over the globe," and in another he points out that "those that give to the Clinton Foundation have been friends of mine for years and years."

The ad also hints at Bill Clinton's own failings, which includes numerous accusations of sexual assault. "Things have changed for Bill Clinton and his standing in the party," a clip from Chris Wallace notes, which cites "the Me Too movement [and] his relationship with Jeffrey Epstein."

"This November... tell Terry time's up," the ad concludes with, as it reminds voters that Election Day is November 2.

Perhaps one of the most illustrative profiles on the Clinton-McAuliffe connection is in a piece for The New York Times by Jeff Gerth, "FRIENDSHIP COUNTS; Clinton's Top Fund-Raiser Made Lots for Himself, Too" from December 12, 1999:

On a sweltering June evening this year President Clinton headlined yet another Democratic Party fund-raiser, but this time the guest of honor was Terry McAuliffe, Mr. Clinton's closest and most loyal Washington friend as well as his tireless money man.

Shedding his prepared remarks, the president said, ''I love this guy.''

When asked whether people deal with him because of his close association with the president, he said, ''No question, that's a piece of it.'' But he quickly added other reasons, including his ties to Representative Richard A. Gephardt, Democrat of Missouri, the House minority leader, and Tony Coelho, the director of Vice President Al Gore's presidential campaign; his Rolodex of 5,000-plus names; and his ability to personally relate to people. Dozens of associates agreed with Mr. McAuliffe's explanation of his success.

For his part, President Clinton offered the following remarks, through an aide, about his friendship with Mr. McAuliffe: ''Since Hillary and I moved to Washington, the time we have spent with Terry and his family has been wonderful. I wish we all had a fraction of Terry's energy, his enthusiasm and his belief in the fundamental goodness of people. It is safe to say that I do not have a more loyal friend than Terry.''

Then there's reporting from Laura Vozzella and Denise Lu for The Washington Post, who in a piece from July 29, 2015 wrote that "Clinton Foundation donors gave $13 million to Terry McAuliffe." Their reporting included this bit, that "The overlap of contributions shows how tightly McAuliffe’s universe is intertwined with the Clintons’. Their long, symbiotic relationship is shaping McAuliffe’s governorship and Hillary Clinton’s prospects for taking Virginia."

In a piece from May 24, 2016, CNN revealed that "First on CNN: Virginia Gov. Terry McAuliffe under federal investigation for campaign contributions."

Despite such a deep connection with a figure like Bill Clinton, who is shady in his own right, McAuliffe is often speaking about "Women's Rights." For the campaign, however, that mostly amounts to a preoccupation with pro-abortion positions and endorsements.