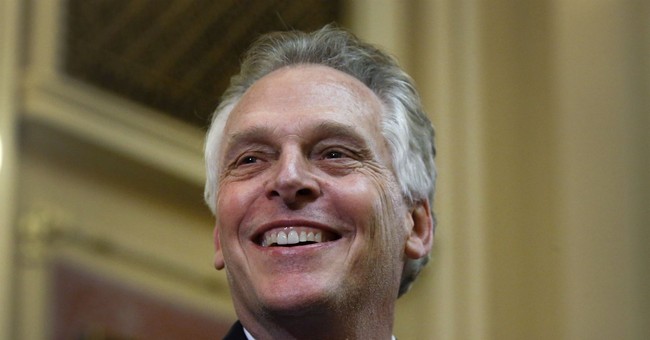 The L. Douglas Wilder School of Government and Public Affairs at Virginia Commonwealth University recently released a poll showing that the gubernatorial race between Democrat Terry McAuliffe and Republican Glenn Youngkin is "in a virtual tie."

Wilder, who co-authored a write-up for VCU News about the poll being in that "virtual tie," is also quoted as saying they're "in a virtual dead heat," with McAuliffe having 40 percent and Youngkin having 37 percent support from 823 adults living in Virginia. As the margin of error is at 5.23 percent, the race is within that margin.

Since the two candidates have not yet met to debate, Wilder points out that the closeness "could change once positions are taken on the issues." He opined that "How the pandemic affects turnout and enthusiasm energizes voters should be of utmost concern."

As Madeline reported on Tuesday, McAuliffe encouraged vaccine mandates and said to "make life difficult" for the unvaccinated. He is also requiring that his staff be vaccinated and encouraging other employers to do so.

I announced that I am requiring all of my staff to be fully vaccinated against COVID-19 -- it's a simple step to keep our community safe. I am committed to leading by example to keep Virginians safe.

BREAKING: Following the full FDA approval of the Pfizer COVID-19 vaccine this morning, I’m calling on EVERY Virginia employer to require all eligible employees to be vaccinated. We need every eligible Virginian to get vaccinated to beat this virus. Together, we'll get it done.

Youngkin, who is himself vaccinated and encourages others to get vaccinated, opposes mandates.

I made the choice to get vaccinated and encourage everyone to join me in doing that, but ultimately it is a personal decision to do so. https://t.co/UDLqEQvtLa

Wilder is quoted in The Washington Post when it comes to the 23 percent of voters who are unwilling to vote for either candidate or who remain undecided. "Here we are, almost in September, and it’s close to decision-making time," he's quoted as saying. "It tells me that they both have work to do."

That article, by Laura Vozzella, took a similar tone, with its headline reading "Polls show close race for Virginia governor, with lots of voters up for grabs."

Vozzella also pointed to a poll from Roanoke College, which shows McAullife having a more sizable lead in likely voters, with 46 percent to Youngkin's 38 percent. Such a lead is outside the margin of error, which is at 4.2 percent of 558 likely voters.

Vozzella commented on such differences:

Differences in the polls’ findings could stem from methodology. In the Roanoke sample of likely voters, 27 percent had postgraduate degrees, a group that leans blue. The sample was weighted to match the 2017 National Election Pool’s gubernatorial exit poll, which was conducted before the NEP changed its methods to correct for overrepresentation of voters with more education.

The VCU survey’s overall sample of voting-age adults was weighted to match Census demographics, with results among likely voters based on a subset.

Other polls have shown that the race is at a statistical tie, or that McAuliffe's lead is a slight one.

Wilder was the Democratic governor of Virginia from 1990 to 1994, making him the first elected Black governor in the country. He made headlines in July for criticizing McAuliffe and saying voters "deserve answers" when it comes to how McAuliffe had previously called on sitting Democratic Gov. Ralph Northam to resign, yet now seeks his support. Wilder also has repeatedly criticized McAuliffe for running for a second term. McAuliffe was previously elected governor in 2013. In order to win the 2021 Democratic gubernatorial primary, McAuliffe defeated many minority and women candidates also seeking the nomination.